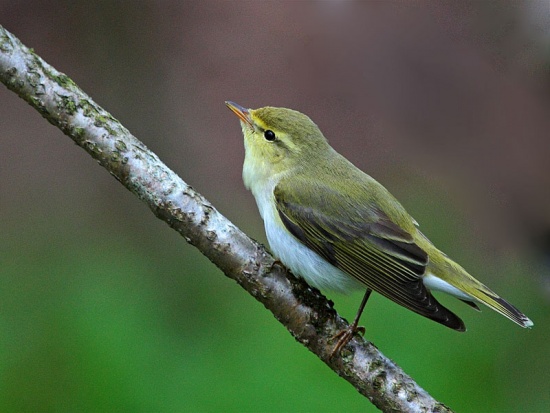 Photo by Macswede
Stockholm, Sweden, May 2012

Long wings, relatively short, broad tail, and strong chest give a distinctive 'front-heavy' shape compared to Willow Warbler and other Phylloscopus species. Brighter green above and more yellow throated than Western Bonelli's Warbler and Eastern Bonelli's Warbler. On the African wintering grounds, could be confused with Laura's Woodland Warbler, but that differs in having bright yellow, not white, under-tail coverts.

Breeds in northern and central Europe and Russia, north to around 63°N latitude and east to about 90°E longitude. In N Europe from sea level, but further south, in mountain forests (Pyrenees, Alps, Balkan, and northern Caucasus mountains). In NW Europe, a very rare breeder in Ireland and scarce and declining in Britain, where primarily in western upland woods. Abundant in eastern Europe, and very common on passage in SE Europe. Winters in tropical Africa between about 10°N and 10°S latitude.

An accidental vagrant to western China, and Alaska (where 3 records). 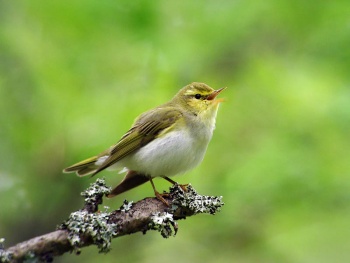 Sings from prominent perches often low down (typically 3–10 m above ground) or in flight between perches, under tall (20–45 m) forest canopy.

The diet includes insects and spiders.

The nest is built near the ground in low shrub.

Song: two distinct songs, typically interspersed; a plaintive descending "piuuu-piuuu-piuuu", and a higher-pitched musical trill often described as a spinning coin on marble (both given in the recording below, in this order). One of the most distinctive and evocative sounds of European forests in spring.

Search for photos of Wood Warbler in the gallery

Search for videos of Wood Warbler on BirdForum TV