Supporter
A long absence for me, but I made some outings between snowfalls during the last few days. Unfortunately, the continued destruction of the birding grounds near to home has continued. Looks like no local undisturbed wetlands for this year. Fill dirt now being hauled in to the last patch to the west and high rises going up on the the ones to the east. Outings for a couple of hours each to each recently yielding almost complete blanks.

Today a small patch between a small remanent of holdouts from a village and a city park did produce at least a few birds. Some Azure-winged Magpie were about, but only about five of them. That area used to be dependable for at least a dozen. Two Great Spotted Woodpecker were spotted working a dead snag. Hiding in the sumac brush were 10 or so Japanese Tit & maybe 10 Yellow-throated Bunting still looking quite faded and worn.

The adjacent river was still frozen over, but beginning to thaw. Hopefully the ice will breakup in the next 7-10 days and I will be able to start finding some migrating ducks, geese, egrets, etc.
O

Based on local birders reporting that the migration suddenly took hold with large numbers of waterfowl being seen, I managed a quick trip to Gedalou Reservoir and it payed off big.

One of my wife's friends, who lives near Gedalou, had called early that morning to tip me off to the lake being "black with ducks", but we weren't able to get out until afternoon. When we arrived at the west midpoint of the lake we turned south and by then it was not that impressive, but we quickly found large flocks of various waterfowl on the lake. Immediately upon arrival two flocks of Common Coot of about 500 each were floating on the open water, mostly just resting. Black-Headed Gull & Mongolian Gull circled low overhead. Other than a few Great Crested Grebe and Goosander, nothing else was to be seen though and I was immediately disappointed thinking that our late arrival had caused us to miss the majority. Conditions were poor though, with a heavy haze which drastically reduced visibility, so I hopefully decided to circle the lake. 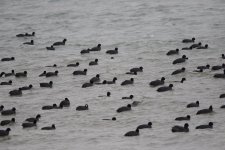 Heading back towards the north it didn't look good for the next three kilometers or so, but then, near the north end of the lake, binocular scans started to pick out several very large flocks obscured by the haze. As we got closer they were still only a brown mass, just obscured enough to be tantalizing, but even in the binoculars and with the 600mm lens, still not identifiable. I started rolling off shots on the camera, doing the best I could and hoping to be able to tease out some IDs later at home. 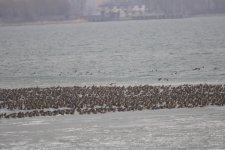 The haze improved a bit and I managed to get a little closer and between the two, I was finally able to start picking out some ID's.

A few Gray Heron, closer into the shore, standing on the ice, were the first to clearly stand out, soon followed by some Mallard that were a little closer to the main flocks. 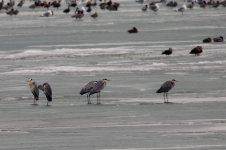 Bean-Goose started to arrive, slowly circling down and had the good fortune effect of spooking the main flock into flight, which then just barely became identifiable as primarily at least 1000 Baikal Teal and another adjacent flock of maybe 1000 Falcated Duck. 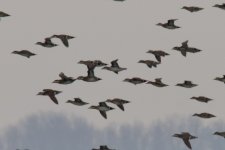 Mixed in with both flocks were maybe 200 Eastern Spot-Billed Duck and smaller numbers of Gadwall, Common Pochard, Northern Pintail, Tufted Duck, Scaly-sided Merganser and even a small group of Cotton Pygmy-Goose. Confusing me at the time, as I rarely see any were another small group of Eurasian Green-Winged Teal. 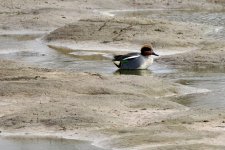 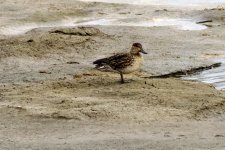 Common Merganser seemed to be restless as they flew back and forth across the scene. A scattering of Great Crested Grebe even had made an early arrival. 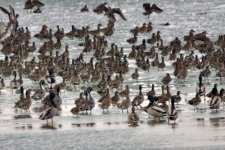 A few Great Cormorants also made an appearance. 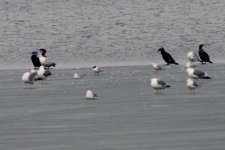 It was only after circling the lake and actually having announced that we could leave that I spotted what was to me the jewel of the day. 20 Oriental Stork, loosely scattered about on the ice shelf! 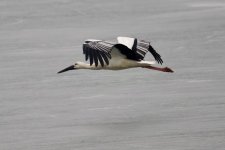 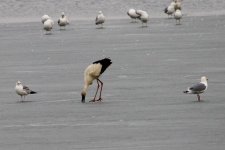 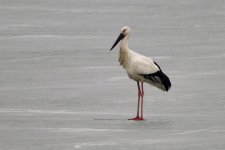 Full list for the day below, though I now see that I somehow managed to split the Common Merganser into two groups. I'll get that corrected.

View this checklist online at https://ebird.org/checklist/S104526617

Sounds like a terrific day at Gedalou Owen, especially after fining all the trashed habitat closer to home. Great pix of the Oriental Storks , and I love that first shot of the massed Baikal Teals.

Could I ask if you have any pix of any of the sawbills - the 20 Scaly-sided Mergansers especially sounds like a great count.

I'm also intrigued by the Cotton Pygmy Geese. Not one I would have expected so far north!

Supporter
Hi Mike,
The sawbills were all binocular aided visual IDs as I was primarily focused on the big flocks and on the Cranes and they were just flying back and forth in the foreground. I found a few poor quality accidental captures of the Common Merganser (I still automatically log them as Goosander), but couldn't find any of the Scaly-Sided M. so lacking any verification of what can be a tricky ID at distance and knowing I wasn't really focused on them, I decided to delete those pending further evidence. They are being steadily reported in the Shenyang area though.

The Cotton Pygmy-Goose were also a binocular aided visual ID. I took note of them and took some time verifying the long upright neck and small rounded head with the distinctive dark hood, but when I tried to get them through the camera lens I couldn't pick the small group out again before the whole flock chose to take flight. Given that I was focused on them and realized what I was seeing at the time, (though I couldn't remember what they were called at the time) I decided to keep those. Note: Tom Beeke has recorded them in Dalian in his field guide. I would agree to them being very rare and they might better be listed as vagrants. They might have got caught up in the migration fervor and just followed one of the big groups up and were now trying to figure out what this ice stuff is. I can imagine that the leader of the group might have been listening to complaints along the line of, "This is a fine mess you've gotten us into!"
O

Supporter
Since I can't get out to do the migration exploration that I am aching to be doing right now, a few little gems from out the backdoor.

Our long term experimenting with a feeder are continuing to slowly improve and at least provide a little bit of distraction while stuck at home. After trying several offerings, we finally found that cracked corn (cracked finer than most chicken feed) and millet seem to be appreciated the most and oats being grudgingly accepted. I tried some peanut butter, but it doesn't seem to appeal to anyone. While mostly sparrows they provide something to observe and seem to attract attention of other birds. A pair of Oriental Magpie visit most days and also steal food from the neighbor's Malamute. Sometimes they just enjoy taunting him and I think he even enjoys the attention they provide. Occasionally we get a visit from others like the Brown-Eared Bulbul and the Azure-Winged Magpie.

Today was off to a lucky start though as just as I opened the curtains to let the light in a large owl flew over with about 20 Azure-winged Magpie in close pursuit. I didn't have the bins in hand, the lighting was terrible and they were high up, so not able to make an ID for sure, but maybe a Short Eared Owl or Ural Owl.

I have been hearing the Little Owl quite close by some nights, but haven't actually seen either of them.

An interesting read Owen - love the idea of the Malamute playing with the magpies!

Eagle Owls and Long-eared Owls also migrate and they may be other possibilities for your big owl.

Supporter
I got enough of a look that I am fairly confident in ruling out Eagle Owl or Long-eared due to the neck/head shape and their being no discernible "ear" tufts. Ural seems most likely from the coloration of the undersides and that I have recorded one here maybe six or seven years ago. But, on further browsing of the field guides, I suppose it could have been a Chinese Tawny Owl.

Fair enough Owen - Eagle Owl is a real brute in flight and I’m interested to hear you’ve had Ural Owl before - one of my most wanted birds!

The Ural Owl was from early on in my birding, but I feel more certain of the ID now, with more spotting experience, than I did then. I was investigating what the O. Magpie were so loudly upset about and had walked back into a wooded area. Not seeing anything except really pissed off Magpie, I happened to turn around and was startled to have a very close encounter with the Ural Owl staring me down. So startled that I forgot I even had my camera in my hand. Ebird has a pic that is almost exactly what I saw that day. https://ebird.org/species/uraowl1 Also, they are rarely reported, but are seen from Mongolia east to Korea, and we would be right in the middle of that range.

On another one you asked about earlier, I have found my first sighting of a Swan Goose, at Gedalou in 2015 and it matches with what I was seeing on my latest outing to there.

Supporter
An update on the feeder project here in Panjin. Yesterday we had the pair of O. Magpie back. One was eating the cracked corn we put out and sampling the peanut butter while the other stole some of the neighbor's dog's food and carried it over to our feeder. It had a piece of meat or maybe skin that it was tearing strips off. Unfortunately, you can't see that as it was holding it down with its foot and it was hidden by the fence it was behind. Had to take the shots through the picture window, so not the best quality. 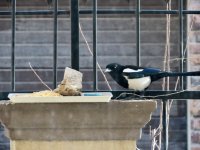 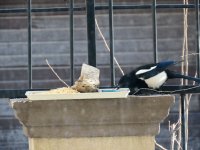 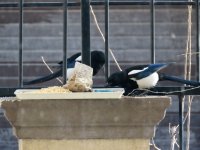 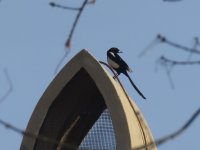 R
Good morning ! Just found your forum and would like to join in ...