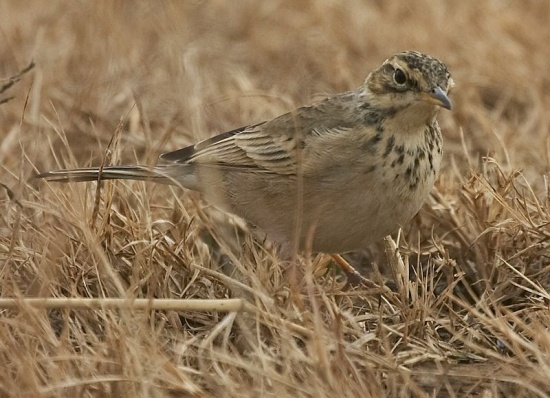 Juvenile birds have a blotched breast, scalloping on the upperparts and some streaking on the flanks.

Long-billed Pipit, which has buff outer tail and a sparrow-like call.

This species was formerly regarded a part of a much larger species called Anthus novaseelandiae which was split in African Pipit, Mountain Pipit, Paddyfield Pipit, Richard's Pipit and Australasian Pipit.
Jackson's Pipit was recently lumped into this species.

More than ten subspecies are recognized[1]:

Some authors split camaroonensis from Cameroon as Cameroon Pipit and latistriatus as Jackson's Pipit.

Open habitats at altitudes of up to over 3000 m, grasslands and fields.

It has an undulating flight and can often be seen perching on posts and bushes. On the ground it walks with a strutting gait and often holds itself very erect.

The song is a repeated series of twittering notes, given during an undulating song-flight or from a low perch.

Search for photos of African Pipit in the gallery