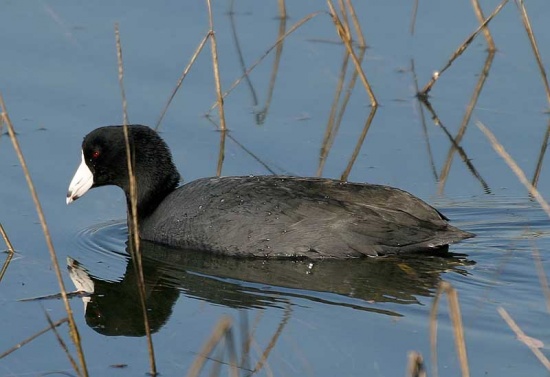 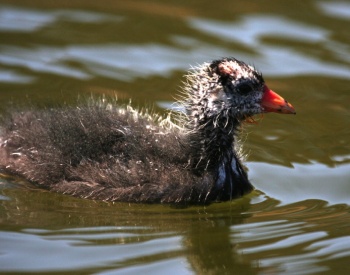 Eurasian Coot is also similar, but has an all-white bill and frontal shield with a 'pinched-in' base, greenish-gray legs, and lacks the white under-tail coverts.

Breeds throughout North America: Alaska and Canada through the continental U.S., and is a resident in Colombia and Ecuador; winters in the western and southern U.S. and the West Indies (where range is apparently expanding1).

In late summer and autumn occasionally wanders north to Newfoundland and even southern Greenland. In the Western Palearctic recorded February-April and October-November in Iceland and the Faroe Islands, Ireland, Britain, and several times in the Azores. In September 1990 recorded in the Algarve of southern Portugal and recently recorded for the first time in Spain (November 1999), with the second record a bird in Galicia in January 2003. 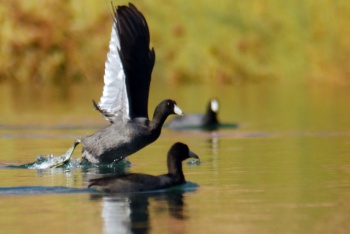 Open ponds and marshes; in winter, also on coastal bays and inlets. 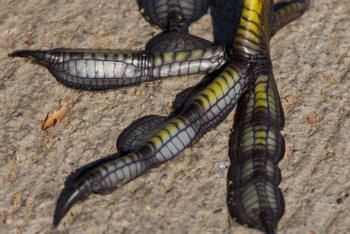 Their diet is mainly vegetarian and consists of underwater plants and algae. Will also take molluscs and aquatic insects, more often during the breeding season. Young chicks are fed mostly aquatic invertebrates. Feeds from the surface as well as diving.

Nesting time in North America is April-July, with a peak in April-May. Nest is usually within 1-5 m of open water and is a large, floating platform of aquatic vegetation, built by both sexes. The clutch consists of 6-15 pinkish eggs, spotted with brown, laid at daily intervals. Incubation by both birds, starts with the 3rd-6th egg, so hatching is asynchronous. Chicks are precocial and leave the nest soon after hatching. Cared for by both parents and return to nest platform for brooding. Fed by parents for the first 2 weeks and become independent over the next 3-10 weeks.

A variety of clucks, cackles, grunts, and other harsh notes.

Search for photos of American Coot in the gallery

Search for photos of American Coot in the gallery

Search for videos of American Coot on BirdForum TV