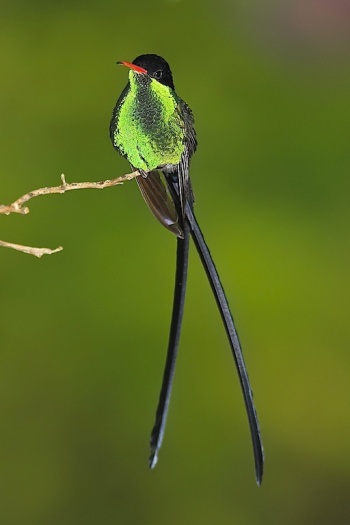 Red-billed Streamertail, one of the many endemic species in Jamaica
Photo by Stanley Jones
Just outside the Village Lacovia, Jamaica, November, 2010

The third largest island in the Caribbean, Jamaica is home to 25 species and a further 20 or so subspecies that are endemic to the island. Around 200 species are regular breeders, passage migrants or winter visitors and another 50 have been recorded as vagrants.

Excellent wetlands survive at Great Morass in the far south-east and in the Canoe Valley and the Black River Lower Morass of the south coast.

The road between Newcastle and Hardwar Gap in the Blue Mts gives easy access to montane forest birds such as Ring-tailed Pigeon and Plain Pigeon and Crested Quail-Dove, Jamaican Tody, White-eyed Thrush, Rufous-throated Solitaire and the rare Jamaican Blackbird.

For those staying at Montego Bay on the north coast there is excellent birding at Rocklands Bird Sanctuary, aka Rocklands Feeding Station near Anchovy, St James. A small entrance fee to this private feeding station will guarantee Red-billed Streamertail, Jamaican Mango and Black-faced Grassquit and the surrounding woodland holds various doves and cuckoos, Jamaican Owl, Jamaican Becard, Jamaican Oriole and Orangequit. Guides are available to assist birders in this area.

A similar range of birds can be seen in the sugar plantation at Good Hope which can be visited by prior arrangement.

The wet limestone forest of the Cockpit Country can be explored via the rough road from Clark's Town to Albert Town. Endemics to be found here include Black-billed Parrot and Yellow-billed Parrot, Chestnut-bellied Cuckoo and Jamaican Crow.

Almost all Jamaica's endemics can be seen at Marshall's Pen, near Mandeville, Manchester. This private reserve can be visited by prior arrangement.

The arid scrub of the Portland Ridge, Clarendon, in the far south of the island is home to doves, Stolid Flycatcher and Bahama Mockingbird. White-tailed Tropicbird nest on cliffs near Hector's River, Portland, in the east of Jamaica and Black-billed Streamertail can also be seen in the area.

Jamaica's best wetland for birds can be found at Black River Morass, St Elizabeth in the south-east. A variety of waterbirds including Black-billed Whistling Duck, herons, rails and wintering waders can be seen in the Lower Morass and nearby Parrottee Ponds.

The Upper Morass has been drained but the area around Elim still holds breeding Black-crowned Night Heron and Limpkin. Another good wetland with Least Bittern, Glossy Ibis and American Coot can be found at Caymanas Dyke Ponds, St Catharine, near Kingston.

Jamaica is a very popular holdiay island with plenty of accommodation, easy car hire, etc. Most visitors stay on the north coast at Montego Bay or Ocho Rios but most roads are good except across the Cockpit Country which may require 4WD.