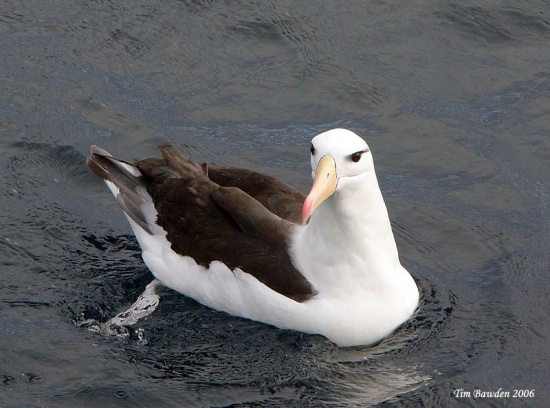 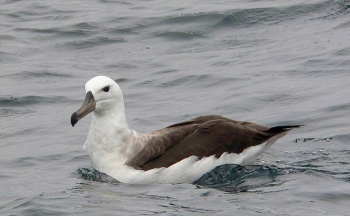 Adult distinguished from Grey-headed Albatross by yellow bill, whiter head with dark eyebrow, and broader dark leading edge to underwing and from Yellow-nosed by yellow bill and underwing pattern. 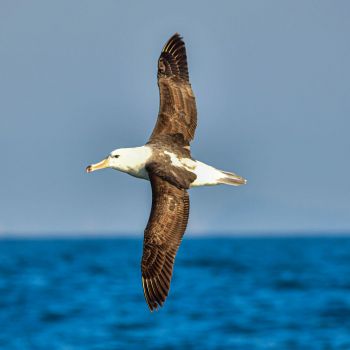 The most numerous, widespread and most-frequently encountered albatross.

Does not occur in the North Pacific but annually recorded in the North Atlantic north to Iceland and the Faroes, northern Norway and even Svalbard. Most are recorded off the south-west British Isles but also recorded in the Mediterranean off Corsica. While most are seen at sea some individuals have returned to the same gannetry each summer for successive years, a recent one returning to Unst in Shetland, Scotland almost every year from 1969 until 1996.

Genera Phoebastria and Thalassarche formerly placed in the Diomedea, but now considered by virtually all authorities (Clements, Howard & Moore, AOU, BOU, SACC) to be separate genera in light of Nunn et al. (1996) and Penhallurick & Wink (2004).

Using melanophrys, Howard & Moore (2003) seems to be the only authority upholding this variant spelling (Clements, Sibley & Monroe, AOU, and BOU all use melanophris). The SACC currently uses melanophrys, though it is listed with the caveat that a proposal is needed to sort out melanophrys vs. melanophris.

BirdLife International (2008) recognise Campbell Albatross as a separate species (T. impavida), citing Robertson and Nunn (1998) and Brooke (2004); they classify it as Vulnerable in the 2008 IUCN Red List.

Breeds September-early May, nest is a large bowl made of mud, vegetable matter and feathers. One egg, white with red-brown blotches at larger end (103 x 66mm). Incubated by female for 56- 70 days and young fed by both parents. Fledges after about 5 months.

Loud and plaintive sheep-like cry at nest, grunting, coughing and cackling calls when competing for food at sea.

Search for photos of Black-browed Albatross in the gallery