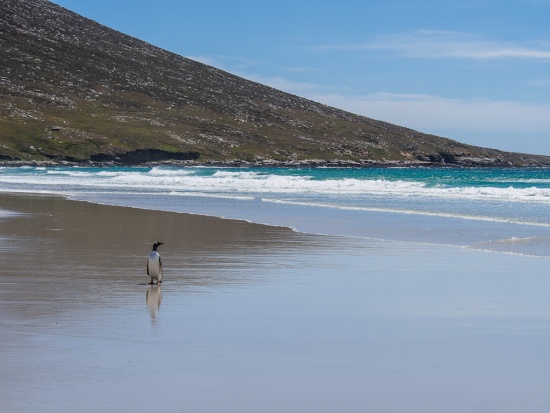 The rugged and windswept Falklands are home to relatively few bird species but the archipelago offers some of the most accessible penguins, albatrosses and other seabirds in the world as well as the endemic Falklands Flightless Steamerduck and several endemic subspecies. These islands are largely treeless and the main vegetation is grasses and a few species of low shrubs. The only trees present have been introduced.

There are two main islands, East and West Falkland, split by Falkland Sound, and hundreds of smaller islands, mainly off West Falkland. The coastline is deeply indented and there are many wide sandy beaches.

Boat-trips and flights to Kidney Island can be arranged at Stanley, a Government owned island reserve with large well established tussac-grass which is now much reduced in many parts of the two larger island in the Falklands. Birds to be seen here include Rockhopper Penguin, Magellanic Penguin and a few Macaroni Penguins, White-chinned Petrel, Great Shearwater and Sooty Shearwater, Grey-backed Storm Petrel and King Cormorant. Short-eared Owl, Tussockbird and Grass Wren and the endemic Cobb's Wren can also be found.

Permission is required to visit Volunteer Point which can be obtainable at Johnson's Harbour. King Penguin breeds here as well as Gentoo Penguin and Magellanic Penguin and other seabirds seen from the beach or during the boat crossing can include Wandering Albatross, Royal Albatross, Black-browed Albatross and Grey-headed Albatross, Antarctic Fulmar, Cape Petrel and Common Diving Petrel. Blackish Oystercatcher and Magellanic Oystercatcher can be seen on the beach.

Pebble Island, off the north coast of West Falkland, supports large numbers of the internationally threatened Ruddy-headed Goose as well as four breeding species of penguins with the possibility of seeing non breeding King Penguin and an Erect-crested Penguin that has been seen in the Rockhopper Colony every year since 1997, Pebble Island is also home to large numbers of wildfowl including Flying Steamerduck, Yellow-billed Teal, Chiloe Wigeon, Silver Teal, Yellow-billed Pintail, Black-necked Swan & the rarer species like Coscoroba Swan, Cinnamon Teal & Red Shoveler. Both Silvery Grebe and White-tufted Grebe breed on the Island. Lodge accommodation is available on the island which can be reached on a 40min flight from Stanley.

Chilean Pigeon, Eared Dove and Ruddy Ground Dove are all recoreded as Rare/Accidental in the Falkland Islands.

At least 227 species of birds have been recorded in the Falkland Islands.

Rabbits and hares and rats and mice have been introduced to the Falklands from Europe and Guanaco and Patagonian Fox from South America but the main mammalian interest in the archipelago is sea-mammals. Southern Sealion, South American Fur Seal and Southern Elephant Seal breed and cetaceans regularly seen in Falklands waters include Peale's Dolphin, Hourglass Dolphin and Commerson's Dolphin and Killer Whale.

The Falkland Islands are situated about 500km east of Argentina and can be reached by air from Chile (Punta Arenas) although the three-day boat-trip from Montevideo, Uruguay, would undoubtedly be good for pelagic species.

Car-hire is available on the islands and many of the more remote islands off West Falkland such as New Island and Carcass Island are now accessible by air from Stanley.

Search for photos of Falkland Islands in the BirdForum Gallery