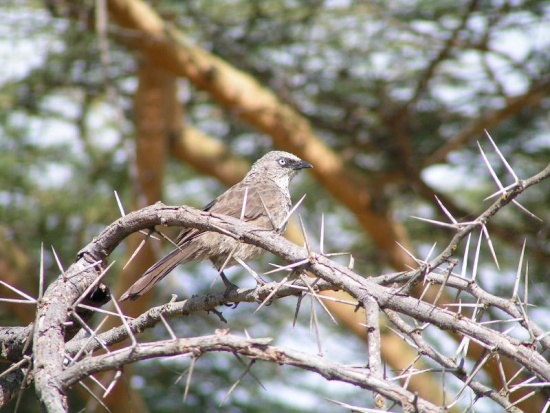 Resident species, but obviously some movements occur as it may be absent in some regions for weeks or months.

Feeds on invertebrates, small reptiles and fruits.
Forages in trees, usually higher than Brown Babbler, but also in grass and near ground. Usually seen in parties of 4 to 5 birds, sometimes mixing with other Babblers, Crested Francolins, Nubian Woodpeckers, Crowned Hornbills or wood-hoopoes.

Breeding season differs through range. Like other Turdoides-babbler this species is a co-operative breeder. The nest is an untidy cup made of roots, creeper stems, twigs and grass stems. It's placed in a dense bush. Lays 2 to 3 eggs. Levaillant's Cuckoo seems to parasitize this species as its reaction towards the cuckoo are very aggressive.

Search for photos of Black-lored Babbler in the gallery