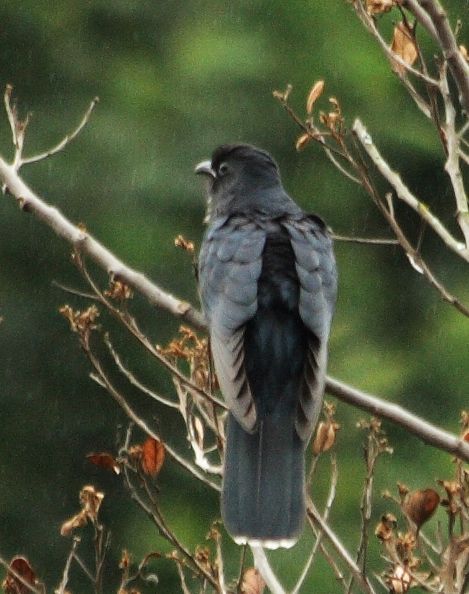 Length 29-31 cm, mass about 90 g. Plumage is black with a greenish gloss on the upperparts, and black below. The tail has a white tip. Some individuals (more females than males) have rufous and brown barring on the underparts. The bill, legs and feet are black, and the eyes brown.
There is variation in the colour of the underparts between the two subspecies.

Southern African birds are intra-African migrants, arriving in their breeding grounds in September and October.

There are two subspecies:

Generally solitary. Seldom seen, even when calling; usually perched high in a tree.

Forages, mainly for caterpillars, in the canopy; sometimes takes prey aerially or on the ground. Also eats other insects, birds eggs and nestlings.

A brood parasite; hosts are mainly Laniarius shrikes, including the Tropical Boubou, Southern Boubou, and Crimson-breasted Shrike in southern Africa.

The song is distinctive: The male has a loud, monotonous whistle "hoop-hoo whoooo"; also a wild, whirling "whirly, whirly, whirly,.....". In southern Africa call from September to December.

Search for photos of Black Cuckoo in the gallery