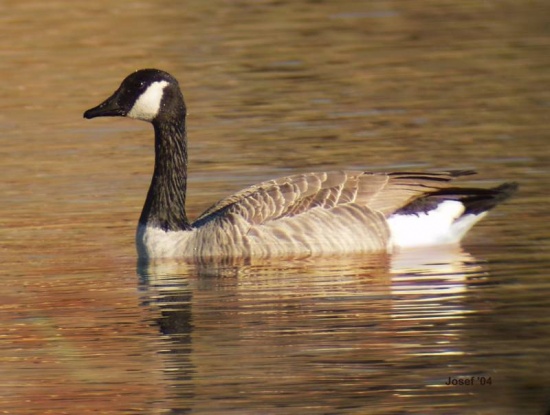 Cackling Goose has very similar plumage pattern and colour, but differs in smaller overall size (60–70 cm), and most importantly, a small, stubby bill (2.8–3.8 cm bill length), in these features being more like Barnacle Goose.

Widespread feral populations, mostly of B. c. canadensis, throughout much of Europe and in New Zealand, derived from escapes or releases from wildfowl collections. 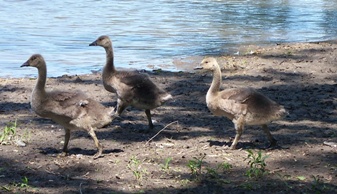 Four very small, short-billed subspecies formerly included in Canada Goose were split as a separate species Cackling Goose in 2004, when genetic data showed they were more closely related to Barnacle Goose than to Canada Goose. 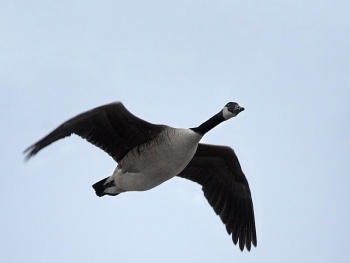 The exact subspecies breeding ranges are becoming difficult to define due to extensive overlap and interbreeding between the subspecies following population increases in the 20th century. Wintering ranges are even more difficult to define, with considerable mixing between the subspecies. In general, migration follows a leapfrog pattern, with the northernmost breeding birds (e.g. central Alaska) migrating the furthest south (as far as northern Mexico), while birds breeding at the southern edge of the breeding range (e.g. Tennessee) only migrate short distances if at all.

Populations of B. c. maxima came close to extinction in the early 1900s due to over-hunting, but have now recovered fully, helped by extensive reintroductions[2].

The nest is placed near water. The clutch of 3-8 eggs is laid in a shallow depression lined with plant material and down. Incubation takes 25–28 days.

Male and female pair off with ahonk and hink, respectively, while in flight.

Search for photos of Canada Goose in the gallery

Search for videos of Canada Goose on BirdForum TV