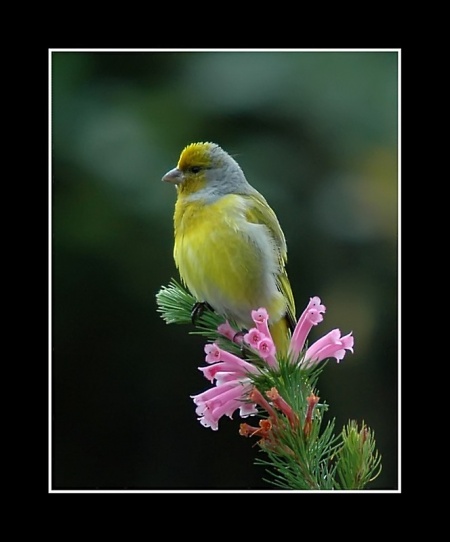 Female duller than male, but has less grey on the head, yellow restricted to forehead, back more streaked, upper breast grayer, central and lower breast paler.
Juvenile: like female but duller and more heavily streaked above and below, underparts off-white.

This species is easily distinguished from the Yellow-fronted Canary by its lack of black face markings. Juvenile can be confused with juv. Yellow Canary but latter has distinct pale supercilium.

This is a polytypic species. Three subspecies are recognised[1]:

Forages for seeds on ground, and in scrub, weeds, and trees.

It builds a compact cup nest, commonly in a shrub.

Call: A sweet "peet, swee-eee" rising in pitch. Flight call usually a three-note "tsit-it-it"
Song: Sustained series of rich, loud, clear and fast jumbled warbles, trills and twitters, often in chorus with several males. Given from a perch or in flight display.

Resident and mostly sedentary, but some local movement and nomadism at edge of range. May undergo regular altitudinal movements.

Search for photos of Cape Canary in the BirdForum Gallery