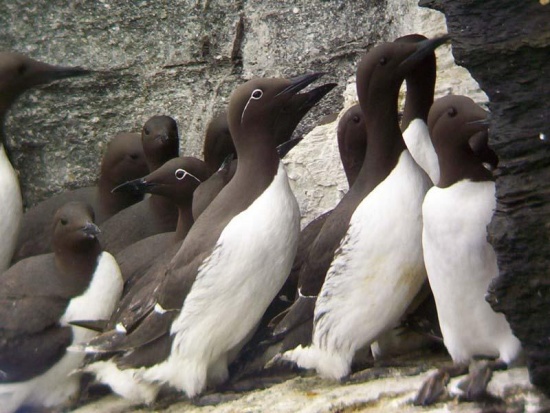 Length: 17.5" (44.5cm); Wingspan 26" (66cm.)
A large alcid, relatively more slender than others in this family. Pacific birds average larger than Atlantic birds.
Adult breeding birds have brown-black upperparts and throat, white underparts, long dark bill, short tail. On first-year and non-breeding birds, the throat is white, which extends to the back of the neck. A thin dark line extends from the eye down behind the cheek. Long straight bill that appears pointed upward with the birds usual posture in the water.
The "bridled" form has a white lining around the eye. 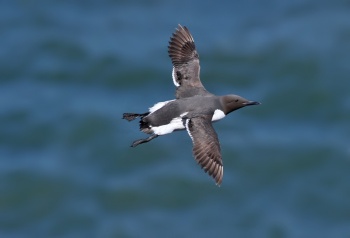 Quite similar to the Thick-billed Murre, which is also genus Uria. The bill of Uria aalge is longer and straighter. 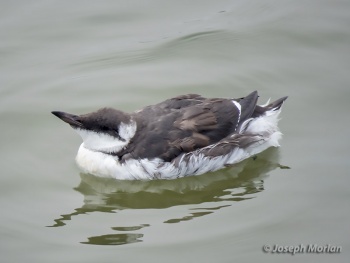 This is a polytypic species, consisting of four currently recognized subspecies[1]:

Additional subspecies U. a. hyperborea and U. a. ibericus not recognised by all authorities[2]

The diet includes fish and invertebrates.

They breed in colonies. The single egg is incubated for 30 days, on bare rock.

Search for photos of Common Murre in the gallery

Search for videos of Common Murre on BirdForum TV

Search for videos of Common Murre on BirdForum TV