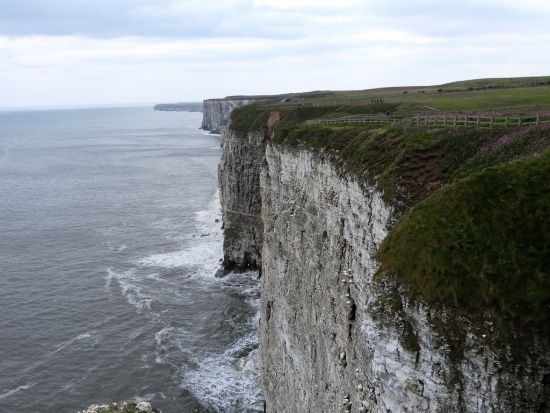 The chalk cliffs at Bempton are located in Yorkshire, south of Filey, on the north side of the peninsula ending in Flamborough Head. Bempton Cliffs have long been famous as one of only two gannetries on the British mainland, and it is also an important migration site as part of the greater Flamborough Head area.

In addition to Northern Gannet there are Northern Fulmar and Shag, Common Guillemot, Razorbill and Atlantic Puffin, Herring Gull and nearly 75,000 pairs of Kittiwake. Common Kestrel, Jackdaw and Feral Rock Dove also nest on the cliffs as well as a few pairs of the declining Tree Sparrow. Linnet, Yellowhammer and Corn Bunting breed on nearby farmland.

Offshore, divers and grebes, shearwaters, skuas and terns can be seen on passage. Passerines such as Northern Wheatear, Ring Ouzel, various warblers and sometimes Red-breasted Flycatcher and Bluethroat are found on the cliff-top. The best area for passerine migrants is Hoddy Cows, a scrubby area reached by taking the coastal footpath north-westwards from the reserve.

From the beginning of May until mid-June is the best time to visit Bempton Cliffs for the seabirds. Visitors can view the seabirds from the barriers on the cliff-top path and there is an information centre. 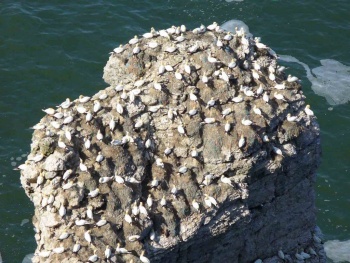 Bempton Cliffs lie on the northern coast of the 10km headland culminating in Flamborough Head, another excellent birding area and also famous for migrants and rarer passerines in particular.

The peninsula is mainly farmland with hedgerows and small woodland patches, grassland and scrub and fringed by 75m chalk cliffs. Danes Dyke is the wooded remains of an ancient line of fortification and runs north to south across almost the entire peninsula. There is also a pond near the tip of the headland and on the southern side is South Landing, a densely wooded valley highly attractive to migrants.

Common Guillemot, Razorbill and Atlantic Puffin breed here as well as Northern Fulmar, Shag, Kittiwake and Herring Gull. Other cliff-nesters include Feral Pigeon, Jackdaw and Rock Pipit and House Martin breeds on cliffs at Thornwick Bay on the northern side of the headland.

It is passage periods that bring birders to Flamborough Head in large numbers. In spring terns begin to pass the head, beginning with Sandwich in late March, and the later flocks are sometimes accompanied by small numbers of skuas.

Divers are generally early migrants with movements from February to April with all three regular species seen and even Yellow-billed Diver has been recorded in the area. This is undoubtedly one of the best sites in Britain for Little Auk which can be seen in thousands after strong northerly gales. Movements may be seen from late October until the beginning of December.

Passerines such as pipits and wagtails, warblers, flycatchers and chats can be abundant. In autumn passage movements are apparent from late July but it is in August and September during north-westerly winds that the largest numbers and variety of birds can be seen.

Passerine migrants are the most likely to produce the scarcer birds that attract many birders and one or two real rarities are recorded every year. As well as the usual pipits, wagtails and hirundines, warblers and flycatchers, chats, thrushes and finches are a selection of subrarities recorded most years. These include Richard's Pipit, Tawny Pipit and Red-throated Pipit, Bluethroat, Red-breasted Flycatcher, Firecrest, Red-backed Shrike and Common Rosefinch. Scarcer warblers usually seen include Marsh Warbler, Icterine Warbler, Barred Warbler, Pallas's Leaf Warbler and Yellow-browed Warbler. Purple Sandpiper is a regular winter visitor to South Rocks on Flamborough Head.

The RSPB reserve can be reached from Bridlington on the B1255 for 3km to Marton and taking the minor road on the left to the village of Bempton. From here the reserve is signposted via Cliff Lane.

Alternatively, the coastal path runs the entire length of the reserve from Filey to Flamborough Head or boat trips to view the cliffs can be arranged from Bridlington.

Flamborough Head can be reached on the B1229 from the north via Bempton or the B1255 from Bridlington and the south. For South Landing turn right onto the B1259 in Flamborough then right again into South Sea Road following this to the car-park and from here walk into the valley.

For the lighthouse and the tip of the headland return to the B1259 and turn right, following this road for 3km to the car-park. North Landing can be reached from Flamborough on the B1255 and from here there are boat-trips from Easter until late August to view some of the seabird colonies.

Search for photos of Bempton Cliffs in the gallery

Malcolm Stewart's review Excellent site for viewing through binoculars or a telescope. However, if you are keen on photographing the birds, the distance to the nest sites from the publicly accessible areas, means that long and probably slow lenses are necessary. This combined with the NE facing aspect means that early morning visits will be necessary to get sunlight on many nest sites.

mikealison's review Everytime I come here, I have a good day. There is such a wide variety of birds to see. The cliff faces are filled with Gannets, Guillemots, Razorbills, Kittiwakes, and Puffins. I have also seen Shags and Cormarants. Not to mention inland you often see owls and Kestrels. They also have a great little feeding station which is always a hive of activity with little birds frantically feeding.

Tip. Turn your back on the Guillemots, Kittiwakes etc. and look inland. My very first visit somebody said "behind you." A Tree Sparrow about ten feet away. Short-Eared Owls in the field etc.

I wouldn't call it a full day out but well worth a visit.