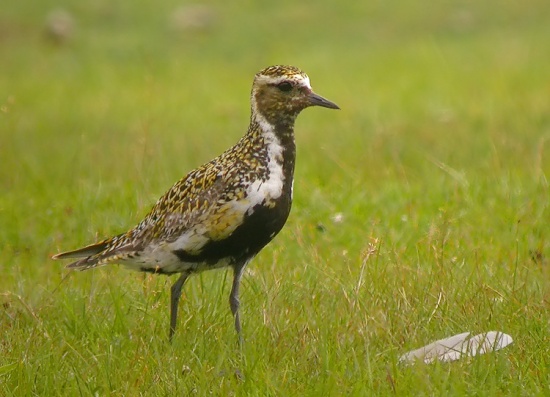 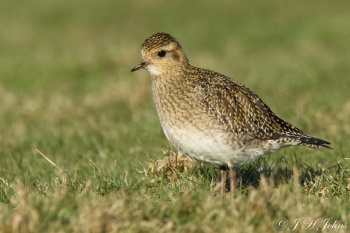 Length 26-29 cm (10¼-11½ in), wingspan 67-76 cm
Breeding adult is stocky with gold-on-black spangled back and cap; black face and belly with white supercilium which goes down neck along flanks; white undertail coverts. Amount of black on face and throat varies; most on northern males, least on southern females.
Non-breeding adult has buffy supercilium, buffy unmarked throat, and golden spotted breast grading to white belly.
Juvenile is very similar to non-breeding adult, differing in fine pale gold barring on the belly.


All plumages have short bill, bright golden spangled back, and white underwing coverts.

Overall more golden coloured than the other Pluvialis plovers.
American Golden Plover in all plumages has longer primary projection, darker golden coloured back, white contrasting supercilium, and grey underwing; in breeding plumage has totally black undertail coverts and belly; in nonbreeding and juvenile plumages has grey weakly barred belly and grey back with dark golden spots.


Grey Plover is somewhat larger, with a longer, stouter bill, white undertail, black and white spotted back, and white uppertail coverts and rump. 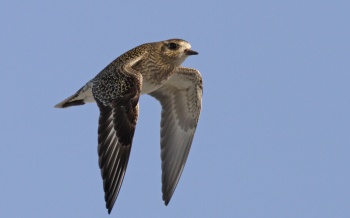 
Vagrant in winter west to the Azores and Canary Islands, south to Mauritania, Gambia and east to Pakistan, and in summer west to Newfoundland in Canada, and north to Svalbard and Jan Mayen. 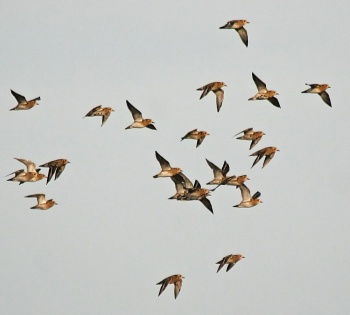 Two subspecies are accepted by a few authors[1], but the variation is clinal with extensive intergradation, with other authorities treating the species as monotypic[2]:

The two subspecies are indistinguishable in winter and juvenile plumages. An additional subspecies P. a. oreophilos is generally considered to be invalid[7].

Breeds on moors and tundra, winters around coasts and on ploughed farmland or closely grazed grassland.

Ground nesters. The nest is usually just a hollow in the open ground, relying on the egg colouration for camouflage. The clutch consists of 4 eggs, which vary from stone-coloured through buff to pale olive; they are well marked with reddish-brown or black streaks, spots and splotches[8].

Search for photos of European Golden Plover in the gallery

Search for videos of European Golden Plover on BirdForum TV