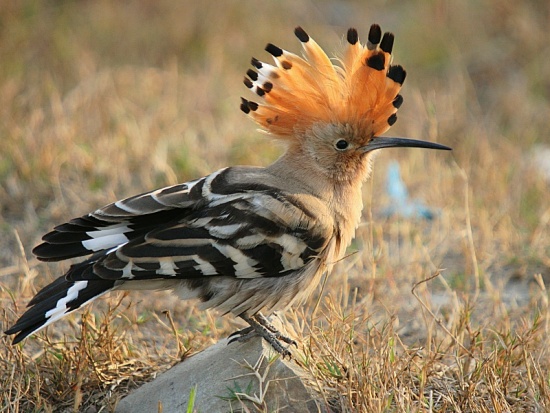 The hoopoe is 19–32 cm (7½-12½ in) long, with a 44-48cm wingspan. This black, white and pink bird is quite unmistakable, especially in its erratic flight, which is like that of a giant butterfly. The crest is erectile, but is mostly kept closed. It walks on the ground like a starling.

Subspecies U. e. africana (which is sometimes split as African Hoopoe) is darker and more chestnut. However, the subspecies U. e. waibeli is also quite dark but is usually retained in Eurasian Hoopoe. The easiest way to separate these two is by looking at the primaries in the spread wing (flight) which are all dark in U. e. africana but have white spots in U. e. waibeli. 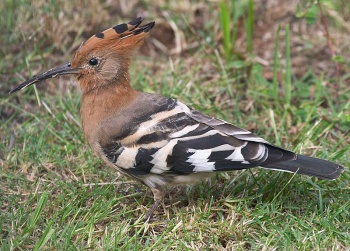 Widespread and generally common in southern Europe, Africa and much of Asia. In the Western Palearctic breeds from Iberia and most of France across Europe to the southern Urals, Caspian and Caucasus ranging north to Poland and the Baltic States. Scarce or absent from northern France to Denmark and in the uplands of Germany, Switzerland and Austria.

Breeds on most of the larger Mediterranean islands, throughout Turkey, the Nile Delta and Valley and in northwest Africa. Small isolated outposts on Madeira and Canary Islands, the Ahaggar of southeast Algeria and in Israel and Jordan. Occasional breeder in some years in Britain and has bred in most northern European countries including Sweden and Finland but range and population fluctuate markedly.

In southern Iberia, North Africa and the Middle East the Hoopoe is a partial migrant or resident but elsewhere it is strongly migratory, wintering in sub-Saharan Africa with small numbers perhaps around the Mediterranean. Main passage periods are Aug-Oct and Mar-May and migrants can be seen throughout Europe North Africa and the Middle East. A scarce migrant in Britain with less than 130 individuals seen in most years. Most occur in April-May and in southern England but regularly recorded north to Shetland. 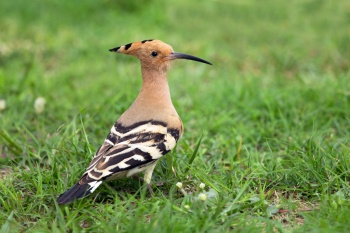 Vagrants recorded on Svalbard, Iceland and the Faroes, the Azores and Cape Verde Islands. Accidental in Alaska. 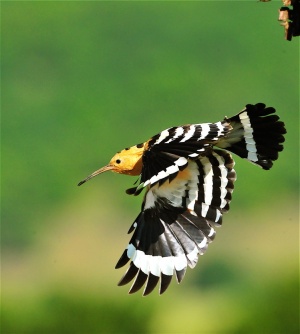 Open woodland and cultivated country such as vineyards and orchards, parks and large gardens.

Search for photos of Eurasian Hoopoe in the gallery