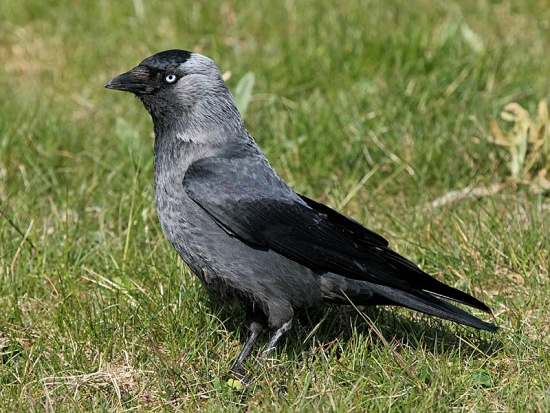 Sexes similar. Juveniles have a dark iris at first, and a softer, tinged-brownish plumage without gloss. 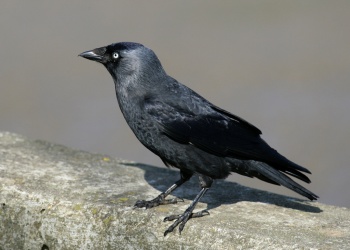 Immature Daurian Jackdaws look similar to this species, but more solidly black on the head.

Found in most of Europe, patchily in northern Africa, the Middle East and western and central Asia.
Accidental vagrant to northeastern United States and Canada.
Abundant in most of its range; populations decreased in most western European countries in the past but have now mostly recovered. 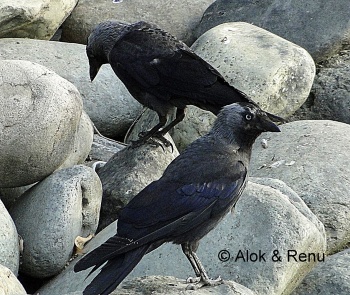 This is a polytypic species, consisting of four subspecies[1]:

Breeds in large holes in trees, or on cliffs, quarries, and buildings, also parks with open woodlands. Winters in open farmland.

They can form large winter roosts, often along with Rooks. 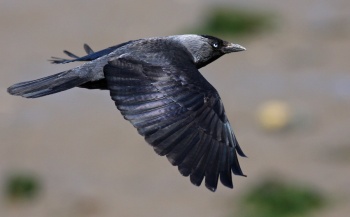 Breeding season starts in late April. Pairs stay together for several years. Usually several pairs are nesting in close proximity on rooftop chimneys, in caves and quarries. The nests are untidy stick structures. Jackdaws are the only corvids which nest in tree cavities, although they will also use crevices in cliffs and buildings. They will use long nest boxes. Lays 3-8 (average 4) eggs.

Search for photos of Eurasian Jackdaw in the gallery

Search for videos of Eurasian Jackdaw on BirdForum TV