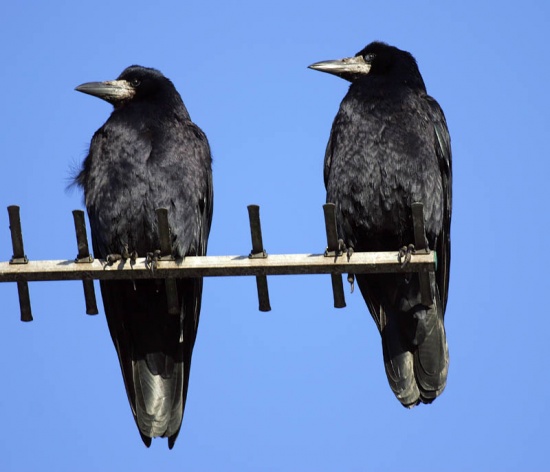 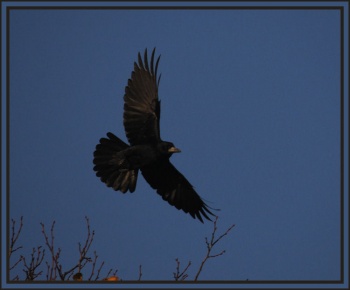 Carrion Crow has a much stouter all black bill, which is de-curved at the tip. Beware of confusion juvenile Rook and Carrion Crow. Common Raven is much larger and has a massive bill.

The smaller East Asian subspecies has its face and throat fully feathered unlike the nominate race in Europe.

Found in Europe and Asia.
Widespread in Europe, reaching south Sweden, south Norway and west Finland in the north, northern Spain in the southwest. Patchily found in Turkey, Armenia, Azerbaijan and Iran. In Russia east to Kazakhstan, Uzbekistan, Turkmenistan, Mongolia and most of China.
Reaches the Mediterranean in winter, also the Middle East, Iran, the Indian Subcontinent and south China,
An introduced population in New Zealand.
Very common to abundant in the west despite massive persecution as a pest bird. Pastinator in the east is much more localized and rarer. 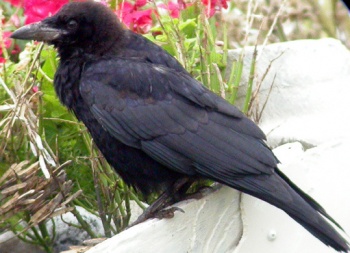 This is a polytypic species, consisting of two subspecies[1]:

Open fields, or feeding in small groups along a roadside. They will come into town parks and villages.

Very gregarious throughout the year 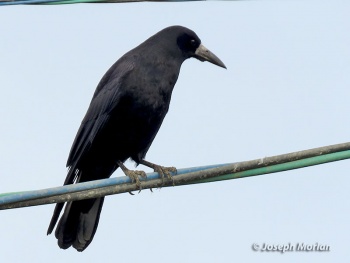 Nesting is in large colonies.
The nest is built high in a tree close to other nests. The nest is bulky and made from twigs bound together with earth, lined with moss, leaves, grass, wool, and hair. Previous years' nests may be renovated and reused.
Three to nine eggs are laid which are smooth, glossy and light blue, greenish-blue or green with dark spots. The eggs are about 40 mm long. The female incubates the eggs for 16-20 days. Both parents feed the young after they have hatched.

The diet includes insects, worms, carrion and seeds. They will visit bird tables for scraps and fruit.

Search for photos of Rook in the BirdForum Gallery

Search for videos of Rook on BirdForum TV