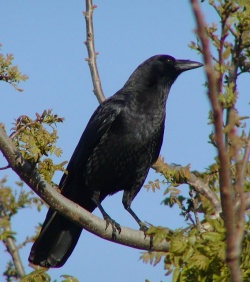 Jackdaws, Crows, Ravens, and Rooks is a genus with almost world-wide distribution, occuring in all continents except South America.
They share:

The members of this genus are generally rather similar and sometimes difficult to tell apart. Most species are highly sociable and many live near humans, sometimes in big cities. Some species are known for their intelligence and even use simple tools like sticks to get their food. As they live near or with men they also found their way into human culture.

Corvus is a genus in the family Corvidae.
As the two Jackdaws differ morphologically, behaviourally and genetically they are sometimes placed in their own genus Coloeus. White-necked Raven and Thick-billed Raven are placed in genus Corvultur and Fan-tailed Raven in Rhinocorax by some authorities.

The following 45 pages are in this category, out of 45 total.