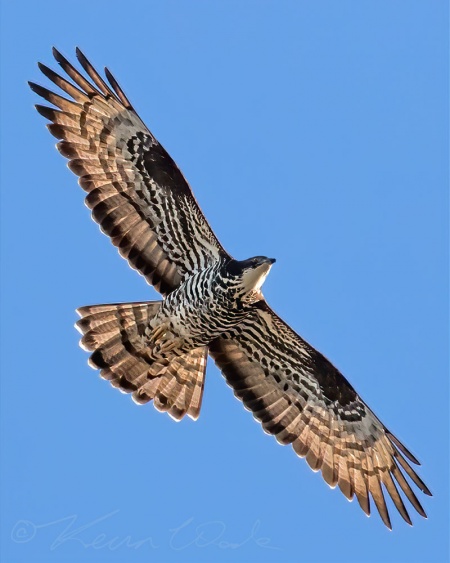 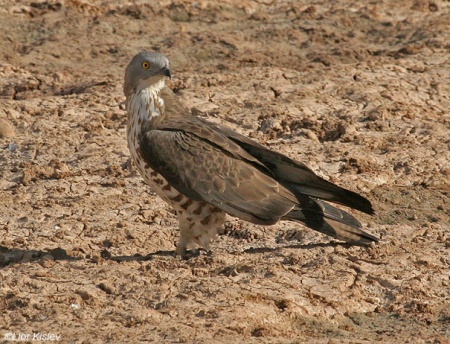 Juvenile bird in flight shows more tail bands and more even bands on the flight feathers in the wing, and lack the strong dark terminal band on both tail and wings

This species is almost as variable as Common Buzzard, but one almost invariable feature (at least in adult birds) is the tail pattern with one dark band at the end and two near the base of the tail. In flight, it will often hold its head with bill pointing forwards, often compared to the head of a Common Cuckoo, while Common Buzzard tends to have its bill pointing downwards. In flight, tail is longer, neck is longer, while the head is small on a Honey Buzzard.
A more difficult question is how to distinguish from Oriental Honey Buzzard, which overlap in the Middle East[2]. 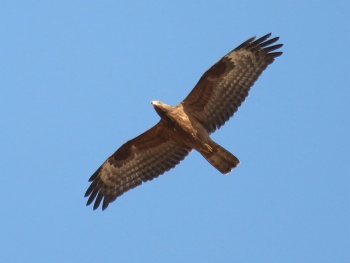 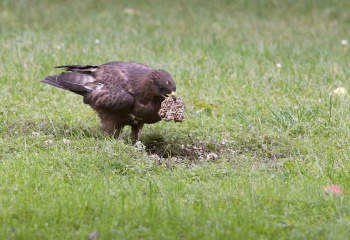 A bird plundering an underground nest of bees or wasps
Photo by amikosik
Warsaw, Poland, September 2008

Widespread in Eurasia and Africa. A summer visitor to most of Continental Europe, breeding north to the English Channel, Denmark, and much of Scandinavia north to the head of Gulf of Bothnia and east across northern Asia. The southern limits are central Spain, Corsica, and central Italy and the Black Sea. Range is rather patchy in France and parts of central Europe, Greece, and Turkey. Also breeds in the Caucasus and a rare breeder in Britain with a scattered population of under 30 pairs in southern and eastern England and in north-central Scotland.

A passage migrant through most of the southern Europe and the Middle East, peak periods May and late August-September. Seen at the major raptor migration points in good numbers but not confined to them. Regular at Falsterbo, Gibraltar, the Bosphorus, the Caucasus and Eilat, but also seen at Sicily, Cap Bon, Malta, Crete, and Cyprus. Apart from the small breeding population the Honey Buzzard is a scarce passage migrant to Britain with about 100 recorded per year mainly at migration watchpoints on the east and south coasts but autumn 2000 saw an exceptional influx, particularly in September, with perhaps as many as 2000 birds recorded.

Widespread in African wintering range from Senegal to Ethiopia and south to the Cape.

This monotypic species used to include Oriental Honey Buzzard, but that species was recently split off.

Feeds on larvae of wasps and bees which it digs out of mainly underground nests.

The male performs an undulating "sky-dance", which involves swooping, gliding and also shivering in the air,

The tree nest is a platform of branches and twigs. The clutch consists of 1-3 eggs which hatch after 30-35 days. Both the male and female share incubation and feeding the young. They fledge after 40-44 days; the young becoming independent some 3-4 months later.