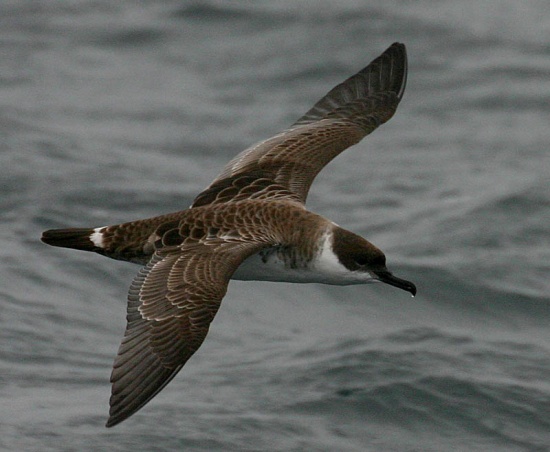 Photo by Joe Cockram
Atlantic Ocean, not too far from Scilly, August 2005 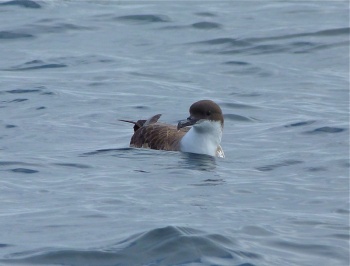 Length 43-51 cm, wingspan 100-118 cm, weight 715-950 g
Grey-brown upper parts with dark cap, U-shaped white band at base of tail. Wings mosty white underneath, but with dark edges, and a narrow dark diagonal band near the base visible at close range. White of underside extends up sides of neck, sometimes across nape, but only down to mid-belly; lower belly and under-tail coverts dusky brown. Thin dark bill. 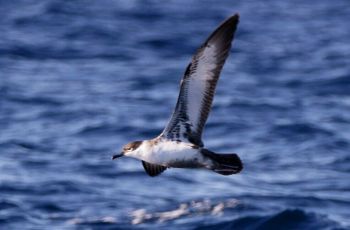 Cory's Shearwater is about the same size with heavier yellow bill, dark head, clean white underwing, and blunt broad wings.
Manx Shearwater is much smaller with no white collar, no white tail band, totally white belly and undertail coverts, and much more blackish.
Audubon's Shearwater is much smaller with short stubby wings, no white collar, no white tail band, long tail, dark undertail coverts, and white spot near eye.
Immature Northern Gannets are superficially similar in plumage pattern, but much larger, and with different flight style.

Atlantic Ocean from Cape Horn northward to southernmost Greenland. Annual migration completes a loop from the eastern seaboard of South and then North America before crossing the Atlantic in August. It can be quite common off the south-western coasts of Great Britain and Ireland before flying south along the eastern side of the Atlantic upon the approach of the northern winter.

This is a monotypic species1.
Formerly placed in genus Puffinus.

A gregarious species, it can often be seen in large numbers from ships or headlands.

Feeds on fish and squid, which it catches from the surface or by plunge-diving. It readily follows feeding whales and fishing boats, where it engages in noisy competition for spoils.

Lays one white egg in a small burrow or in the open grass, which it visits only at night to avoid predation by large gulls.

Call: A piercing eeyah usually given when resting in groups on the water.

Search for photos of Great Shearwater in the gallery