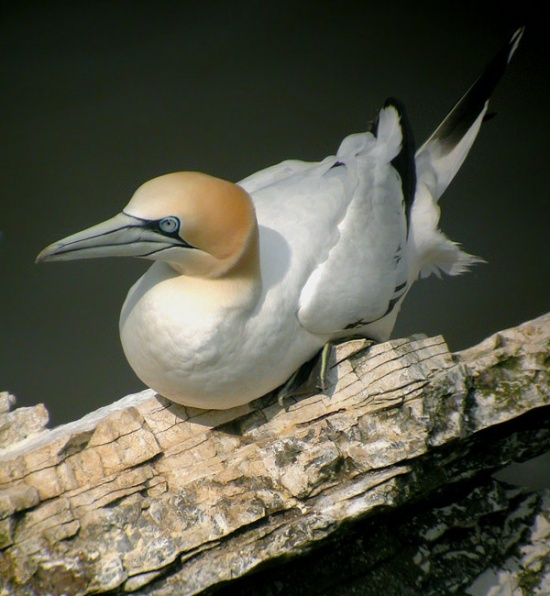 Immature: Dark brown in their first year, and gradually acquire more white in subsequent seasons until they reach maturity after four or five years
Chick: Covered with white down; black bill and facial skin.

Over 70% of the world population of Northern Gannet breed in more than 20 colonies around the coasts of the British Isles and in particular off north and west Scotland. The world's largest gannetry is on St Kilda with over 50,000 pairs. There are also colonies on the Flannan Islands to the west of the Outer Hebrides, further north on remote Sula Sgeir, and Sule Stack to the west of the Orkneys. 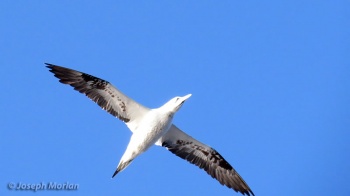 Shetland has long-established colonies on Noss (around 8,500 breeding pairs) and Hermaness with more recent breeding on Foula and Fair Isle. Further south in Scotland there are large gannetries on Bass Rock in the east and Ailsa Craig in the west and two smaller, more recently established colonies on Scar Rocks off the Mull of Galloway and Troup Head, Grampian. England's only remaining colony is on Bempton Cliffs, North Yorkshire and the single Welsh site is the island of Grassholm, off Dyfed where more than 30,000 nest.

Ireland has five gannetries, Little Skellig off County Kerry is the largest with more than 20,000, Bull Rock, County Cork and Great Saltee, County Wexford are much smaller with less than 2,000 each, and the smallest are Clare Island, County Mayo and the newly-founded Ireland's Eye colony off County Dublin.

In the English Channel there are breeding Gannets on Ortac and Les Etacs off Alderney in the Channel Islands and the most southerly colony in Europe is on Ile Rouzic in the Sept Iles off Brittany. 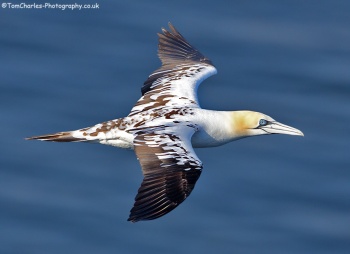 Elsewhere in Europe there are six gannetries in Iceland including the Westmann Islands, one on Mykinesholmur in the Faroes and 6-7 in Norway. All the Norwegian gannetries are relatively recently established and include Norway's first, at Runde in the south and the most northerly, at Syltefjordstauran. The newest and world’s northernmost colony was established at Bjørnøya (Bear Island) in 2011, extending the species’ breeding range well into the Arctic. One in the Lofoten Islands has been abandoned probably through persecution. Breeding has recently occurred for the first time on the Murman coast of Russia and the first breeding for Germany took place on Heligoland in 1991 with more than 90 pairs by 2000. In 1996 the first breeding in the Mediterranean occurred at Bendol, Var in southern France.

In North America breeds mainly on the Gaspe Peninsula of Quebec and Newfoundland.

After breeding Gannets disperse, some remain at sea within breeding latitudes but others move south to Biscay, off Iberia and south to West African waters. In winter also found in the Mediterranean, mainly east to Italy but a few wander as far as Cyprus and beyond.

North America birds winter on the eastern seaboard from New Jersey south to Florida and in the eastern Gulf of Mexico.

Vagrants recorded north to Svalbard, the Baltic States and Poland and even to land-locked countries such as Austria and Switzerland. 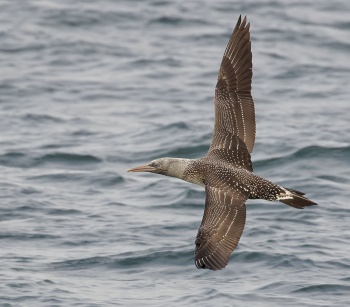 This is a monotypic species[1]. Sometimes placed in genus Sula. Formerly lumped with Cape Gannet and Australasian Gannet. All three form a superspecies.

Breeding colonies are located on isolated stacks or remote islands, sometimes on mainland cliffs. At sea when not breeding, over continental shelf. Occasionally on large inland waters as a result of severe weather.

They plunge from a height of 30 metres or less, hitting the water at up to 60mph. They have a special opaque membrane which drops down over their eyes to prevent debris getting in during dives. This membrane has led to a popular, but completely false myth that gannets go blind from diving too often.

Includes small fish, which it takes from a steep, high-speed dive. 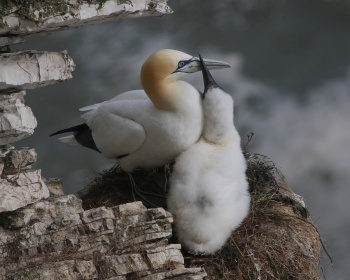 Colonial nesters, the nest is a pile of mud, topped with grass or other vegetation on a steep cliff face. They lay a single pale blue egg.

In Shetland dialect, they are known as the 'Solan Goose'.

Search for photos of Northern Gannet in the gallery