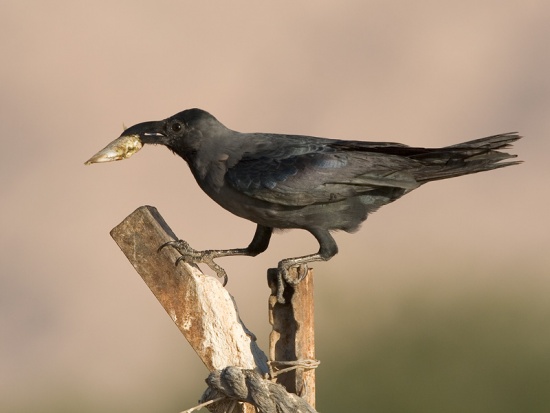 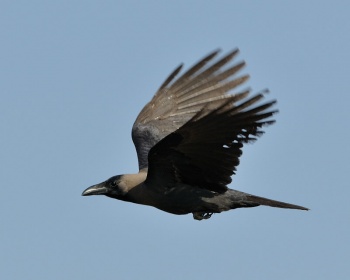 The subspecies insolens may be confused with Large-billed Crow. Note the shape of the head and the size.

Pakistan, Sri Lanka, Maldives and India, Burma, Bhutan, Nepal and coastal southern Iran. Spreads to Eastern Africa (as blind passengers on ships) and the Middle East.
Abundant in most of its range.

This is a polytypic species[1] consisting of 5 subspecies:

Introduced populations in many cities and harbours around the Indian Ocean and beyond. Occurs in the Western Palearctic in Egypt and Israel. Sometimes in European ports like Rotterdam. 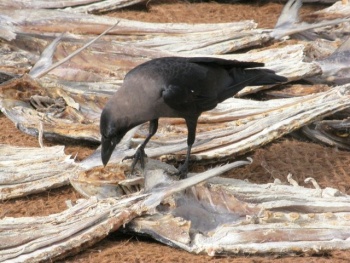 In a variety of tropical and subtropical habitats, usually near cities, towns or villages.

Usually seen in groups, sometimes big flocks. Has little fear of man but is always alert and constantly wary.

Diet includes human scraps, small reptiles and other animals such as insects and other small invertebrates, eggs, nestlings, grain and fruits.
Does great damage to crops and known to kill newborn domestic animals.

Breeding season varies in its range. It lays 3-6 eggs in a typical stick nest, and occasionally there are several nests in the same tree. In South Asia they are parasitized by the Asian Koel.

A resident species with some short-distance movements.

Recording by Alok Tewari
Dist. Gurgaon, Haryana, India, Feb-2016
Call given by two birds one calling softly and other loudly.

Search for photos of House Crow in the gallery

Search for videos of House Crow on BirdForum TV