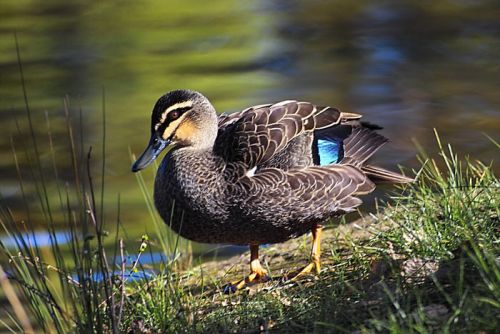 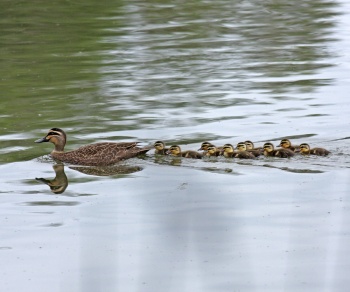 Similar to the female Mallard which has been introduced into Australia and New Zealand from the Northern Hemisphere. The two species will interbreed in situations where Mallards have been released. Female Mallards are paler, have a blue speculum bordered with white, an orange bill with gray saddle and a less pronounced face pattern. 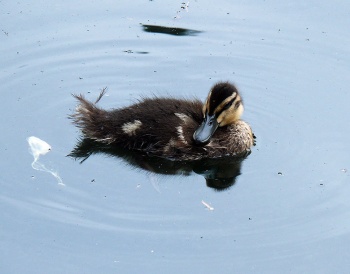 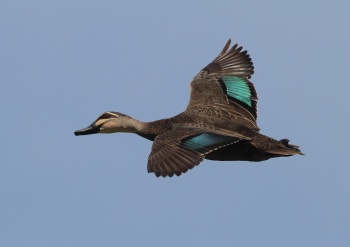 The subspecies A. s. rogersi formerly attributed to the Sundas to southern New Guinea, Australia and Tasmania is now merged with nominate A. s. superciliosa.

The New Zealand population has declined sharply in numbers, at least in its pure form, due to competition from and hybridisation with the introduced Mallard.

A wide variety of water habitats, preferably with a lot of vegetation and low salinity.

These birds are seen in pairs or small flocks.

Nests on the ground under cover or sometimes in tree forks or epiphytes. The nest bowl made of debris at the site lined with plucked breast feathers and down. The clutch of 8-10 whitish to pale green eggs is incubated for 26-29 days. The female often initiates courtship and displays include preening, bobbing and wing-flapping. Often, two broods will be raised in a year. The number of offspring produced may seem quite high, but only 20% of these will survive past two years of age.

Females give a decrescendo call of about 6 loud quacks in a row, soft quacks communicate with ducklings, and a rapid gag gag gag repulsion call in courtship displays and when pursued by males. Males give soft raeb raeb call of variable length.

Mostly sedentary, but some dispersive movements, especially from Australian inland areas in response to drought.

Search for photos of Pacific Black Duck in the gallery