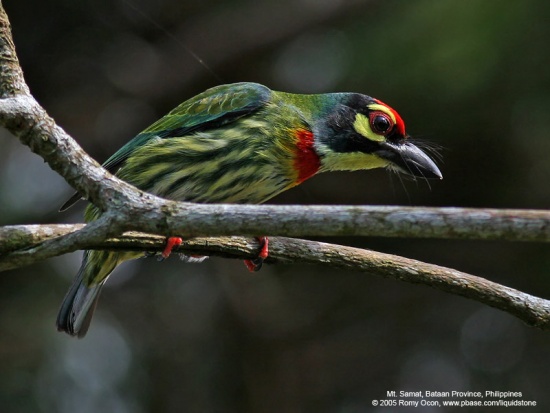 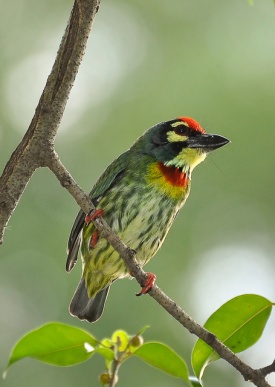 Smallest barbet at 15–17 cm (6-6¾ in)
The dark, stout bill is fringed with bristles or barbs, which give the barbets their name.

The most common and widespread of the barbets found in India, through south China and South-east Asia through Sumatra, Java, Bali and the Philippines.
Widespread and common in its range, has adapted to man-altered habitats easily. Has colonized many areas due to forest clearance and logging, eg. peninsular Malaysia in the 1930s, arriving in Singapore in 1957. 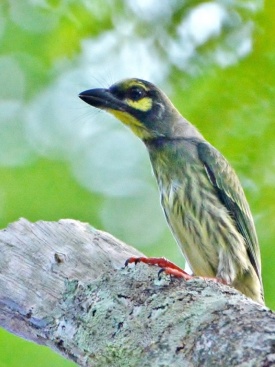 Formerly placed in the genus Megalaima. 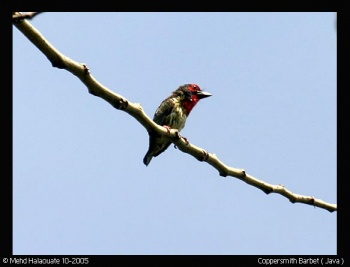 Perches on bare branches or high tension wires, in groups, often up to six. 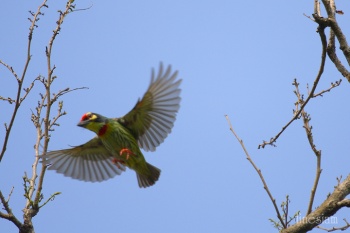 Unlike its larger congeners it does not always frequent the canopy but will often feed low on small fruits in tree and brushs. Prefers Banyan, Peepul, and other wild figs, various drupes and berries, with the occasional insect, caught clumsily in flight.

Their flight action is straight with rapid wing beats.

The breed from November to June, mainly from February to April.
The nest is in a hole, excavated in a decaying or dead tree or branch, about 40 cm deep. There are 2-4 white eggs, usually 3, laid on the bare wood. The length of incubation is not known. Both partners help with nest duties.

Call is a loud, rather metallic tuk tuk tuk (or tunk), sounding rather like a copper sheet being beaten, which accounts for its name.
The call is repeated monotonously for long periods, beginning with a subdued tuk and then building up to an even tempo and volume, the former varying from 1.5 to 2 per second. The bill stays shut during each call and a patch of bare skin either side of the throat inflates and deflates with each tuk call. Body and tail shaking accompanies the calling.
The birds are not very vocal in cold weather, so they are silenced by a spell of rain or cold. In India, this bird's call is one of the most familiar sounds in the hot season.

Search for photos of Coppersmith Barbet in the gallery

Search for photos of Coppersmith Barbet in the gallery