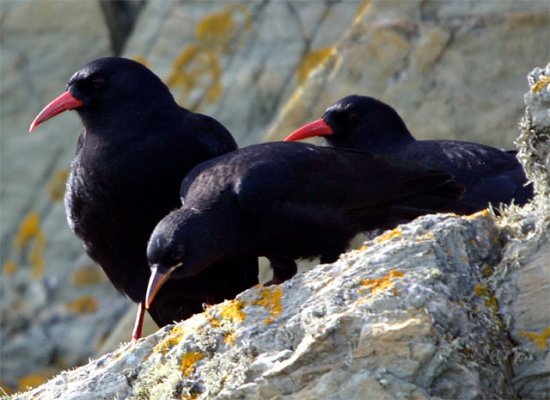 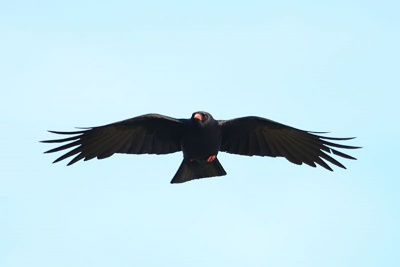 Can be confused with Yellow-billed Chough if bill is not seen. The broad wings with the distinctive fingers are typical for Red-billed Chough.

They breed on the west coast of Great Britain, mainly in Cornwall, Wales and Islay in Scotand; the Isle of Man and Ireland. Southern Europe and the Mediterranean basin, the Alps

It breeds in Great Britain, the Isle of Man, Ireland, southern Europe and the Mediterranean basin, the Alps, and in mountain areas across central Asia, India and China.

There is also an isolated population in the Ethiopian highlands.
Locally common. Has declined in part of its range, especially in Europe.

Hybrids with Yellow-billed Chough have been reported.

Coastal cliffs and high mountain pastures. Up to 6000m in the Himalayas and reported at 7950m near Mount Everest.

Diet consists almost entirely of insects and terrestrial molluscs, including craneflies and beetles

They build their nests in crevices of caves or cliffs. The nests are constructed from roots and stems of plants such as heather or furze, and are lined with hair or wool. The clutch consists of 3-6 eggs which are laid in April-May in western Europe.

A resident species with some altitudinal movements.

It has a loud, ringing call chee-ow.

Search for photos of Red-billed Chough in the gallery

Search for videos of Red-billed Chough on BirdForum TV