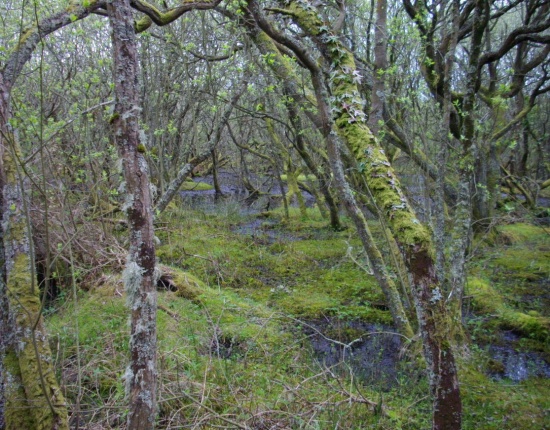 Situated in the Irish Sea roughly midway between the Irish coast and Cumbria, the Isle of Man is about 50km from north to south and 20km across.

Rarely thought of as a birding destination, the Isle of Man has long been neglected from an ornithological point of view despite being the site of an active bird observatory since the early 1950s.

There is a range of habitats from sandy beaches to high cliffs around the shores and woods, moors and wetlands away from the coast. The central hills of Man lie in a northeast - southwest direction and reach their highest point at Snaefell at 621m.

In addition the Isle of Man has a healthy breeding population of Red-billed Chough, some excellent seabird colonies and attracts good numbers of waders and waterfowl on passage and in winter.

Point of Ayre is the northernmost point of the island and a fine seawatching site with all three divers, various seaduck and seabirds including auks and skuas.

It can be reached on the A10 then the A16 north of Ramsey. To the west are the 10km long sandy and shingle beaches of The Ayres, parts of which are protected as nature reserves.

The sands here attract a good range of waders in some numbers on passage and in winter and there are Little Tern, Common Tern and Arctic Tern with non-breeding Sandwich Tern also present. The beaches are backed by sand-dunes and maritime heath, gravel pits and freshwater pools.

The lichen heath is unique on the Isle of Man and of great botanical importance with Usnea articulata growing on the ground and, outside Ireland, the only colony of Dense-flowered Orchid in the British Isles.

Short-eared Owl often hunts over the dunes and heath, often joined by Northern Raven in winter when Twite is also usually present.

The most important freshwater wetland on the island is Ballaugh Curraghs reached on minor roads from the A14 north of Sulby or the A10 north of Ballaugh.

The reserve shows a range of successional wetland habitats from open water to dense willow carr and birch scrub and there are extensive rushy meadows where orchids grow in abundance. The Manx Wildlife Trust operate a hide and from here visitors can see Greylag Goose, Eurasian Teal, Water Rail and other wetland birds. Most importantly this area is the site of the largest Hen Harrier roost in Western Europe and the total number of birds has reached 160 at times although less than half this is more usual. In addition, Peregrine Falcon and Merlin hunt over the marshes in autumn and winter.

Druidale lies in the centre of Man and consists of extensive grass and heather moorland with associated conifer plantations and more recently planted deciduous stands. Red Grouse, Hen Harrier and Short-eared Owl are typical birds of this area with Merlin hunting the area on passage. Northern Wheatear breeds on the grassland and Lesser Redpoll in the conifer stands.

Probably the best seawatching site on the island is Peel Hill on the west coast where there are dramatic slate cliffs and a a castle on the rocky islet of St Patricks.

On the east coast to the southeast of Ramsey is Maughold Head which also has both guillemots and Atlantic Puffin, Peregrine Falcon and Red-billed Chough with the addition of frequent sightings of Grey Seal on the rocks.

To reach the head take the A15 to Maughold village the follow the track to the lighthouse car park. From here head for St Maughold's Well and follow the coastal footpath.

The seas off Ramsey hold concentrations of Common Goldeneye in winter.

To the south is the island's main town of Douglas which lies on Douglas Bay, another winter haunt of Common Goldeneye. Onchan Head forms the northern edge of the bay where Purple Sandpiper are regular passage and winter visitors.

South of Douglas on the southeastern coast of Man is Port Soderick where there is a cliff-nesting House Martin colony, a rare sight in today's Britain. The coast here consists of slate cliffs with scrub-covered and wooded slopes. Peregrine Falcon and Eurasian Sparrowhawk hunt along these slopes and Northern Raven and Red-billed Chough can also be seen.

The Castletown Bay area in the extreme southeast of the island is one of the best birding areas. A wide sandy bay with weed-covered rocks, intertidal mud and saltmarsh, coastal grassland, low cliffs and a rocky islet, all combine to attract a wide range of waders including Golden Plover and Grey Plover, Northern Lapwing and Ruff, both godwits, Whimbrel and Greenshank.

Scarcer waders such as Little Stint and Curlew Sandpiper are regular and rarities in the past have included Temminck's Stint, Long-billed Dowitcher and Buff-breasted Sandpiper.

This is one of the best areas in the British Isles to see feeding flocks of Red-billed Chough at close range and nearby Derbyhaven holds divers in winter, especially Great Northern Diver.

The extreme south-western tip of mainland Man has some of the island's most spectacular coastal scenery and particularly the Chasms and Sugarloaf where there are vertical slate cliffs and an offshore stack.

Take the lane south of Cregneash village and climb to the car-park. From there walk carefully down to the Chasms or, an alternative is to park at Fistard and walk for about 1km. The main attraction here is Red-billed Chough but there are also Northern Raven, Black Guillemot and Common Guillemot and sometimes Atlantic Puffin.

The best-known birding site on the Isle of Man is of course the Calf of Man where a bird observatory has been established since 1952. This 2.5km2 islet lies about 600m off the extreme southwestern tip of mainland Man and consists of mainly rough pasture grazed by Loghtan Sheep, the ancient breed of the Isle of Man, often with four horns.

The 8km shoreline is fringed by steep slate cliffs with Great Cormorant, Shag, Fulmar, Guillemot and Razorbill breeding. Northern Raven, Red-billed Chough and Stonechat are present all year but the main attraction is migrants and a number of rarities have been recorded.

Raptors seen here have included Marsh Harrier, Northern Goshawk and Osprey and rare seabirds such as Sabine's Gull have been recorded.

A wide range of passerines pass through and rare species have included Pechora Pipit, Aquatic Warbler, Red-breasted Flycatcher, Woodchat Shrike and Common Rosefinch. The first Mourning Dove for the Western Palearctic was recorded here in October 1989.

Offshore, divers occur in good numbers along with many other seabirds especially during passage periods. The Manx Shearwater was described from specimens taken from this islet.

The Isle of Man has long been popular with visitors and there is a well established tourist infrastructure.

The bird observatory can arrange basic accommodation for a small number of the very keen birders but for the majority of visitors there is an abundance of bed and breakfasts, guest houses and hotels distributed throughout the island.

The Isle of Man is small enough to be conveniently covered from a single base and it is unfortunate that, apart from the observatory, it has had little interest from the birding community.