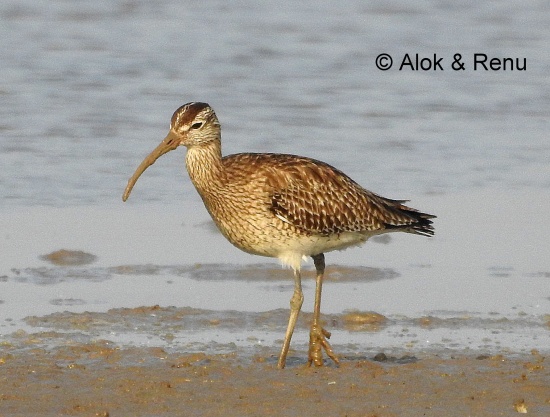 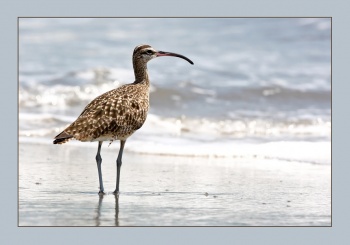 Length 37-45 cm (incl. bill 6-9), wingspan 78-88 cm
The body of this bird is patterned in brownish to brownish-grey colours, especially on the underside over a lighter basis. The bill is bent down about 1/3 from the tip. On the side of the head is a dark stripe through the eye, a light supercilium, a dark stripe above that one, and a light central stripe. The three crown stripes are the most conspicous of these if the crown can be seen well. Three main forms are recognized: the European forms have a light coloured tail and a white rump that continues up the back, but is only visible in flight. Siberian forms have darker tail and lower rump, but still show the white area on the back. American forms have the tail, rump and back of a similar colour to the wings.

The bill is shorter and less evenly curved than in the Eurasian Curlew. The pattern of stripes on the head and especially in the crown is diagnostic at least in the majority of the range. Bill is significantly shorter than in the Long-billed Curlew.

This is a species with a circumpolar distribution, breeding in northern areas of the Western Palearctic (including the Shetland and Faroe Islands), Asia, and the Americas. These birds are all long distance migrants, for example the European populations winters on African coasts, rarely in Europe. 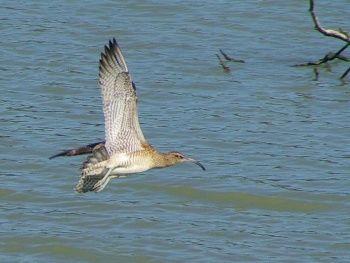 The last subspecies has been proposed split as a full species, Hudsonian Whimbrel Numenius hudsonicus (with the rest becoming Eurasian Whimbrel); this has been accepted by the BOU taxonomic committee. 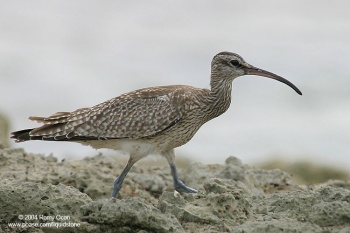 On passage (mostly late April-May and July-August) seen singly or in small parties.

Whimbrel are ground nesters, making a shallow nest approx 18cm in diameter and up to 6cm high, this is lined with vegetation. The eggs are olive to buff with dark brown spots and blotches, a clutch is usually 3 to 4 eggs. Both male and female incubate the eggs for up to 28 days, hatching is synchronous as incubation only starts after the last egg is laid. The young are nidifugous and self feeding, they fledge within 40 days and are completely independent very soon after fledging. On their breeding grounds, individuals will fly up from hundreds of meters away to confront perceived threats (from Common Ravens to foxes and people). They will harass the intruder with aerial chases and constant calls.

Takes both animal and plant food dependent upon availability. As befits its shorter bill, whimbrel hardly ever probe deeply into the mud, usually taking things from or near the surface. They tend to follow the tide when feeding on the coast, locating prey/feeding sites visually. Inland they will pick food off vegetation, the ground and the superficial layers of the soil. They are known to eat molluscs, crustaceans(including crabs), polychaete worms, various insects (from flies to dragonflies), spiders, and millipedes. Plant material eaten is mainly berries but also includes seeds and leaves.

Calls include a long, chirruping whistle call and a softer, plaintive mewing given on the ground between members of a pair.

Search for photos of Whimbrel in the gallery

Search for photos of Whimbrel in the gallery