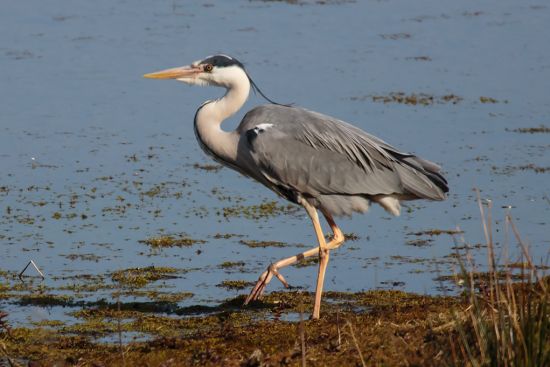 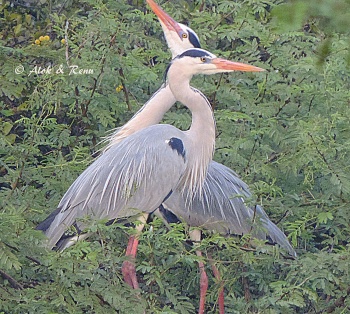 Great Blue Heron of the Americas is similar but larger with longer legs, longer neck and narrower black crown stripes. Great Blue has rufous thighs and leading edge of wing. Purple Heron is smaller and slimmer with rufous-brown coloration. Black-headed Heron has a black head and contrasting black and white underwings. Humblot's Heron is is much darker and lacks the dark shoulder patch. White-bellied Heron and Great-billed Heron are both much larger and drabber. 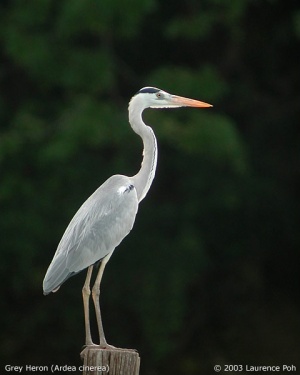 A very widespread Old World species breeding across much of Eurasia and Africa.
Breeds throughout the British Isles and much of mainland Europe from north and central France north to coastal Scandinavia and east across Russia to Sakhalin, Manchuria and Japan. In the south found at scattered localities from Iberia to Greece and Turkey, the Caucasus and east across southern Asia, India and Indochina south to Sumatra and Java.

In Africa breeds on the Mediterranean coast and in the Nile Valley, on the Banc D'Arguin in Mauritania, probably also on the Azores, in West Africa, western Madagascar and from Ethiopia south to South Africa.


Northernmost birds are migratory and winter range is more extensive in Europe, Africa, south-west Asia and Indonesia.
Vagrant north to Greenland and Svalbard and to the south a rare resident/migrant or vagrant to Azores and Cape Verde Islands. Also recorded on Bermuda, the West Indies and Newfoundland. 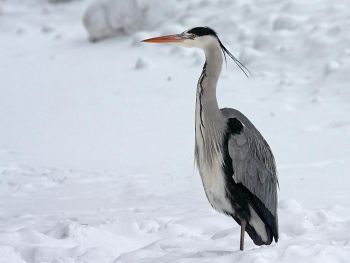 The subspecies differ slightly in size and grey tone; A. c. monicae is the palest subspecies. 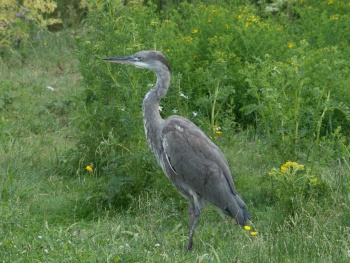 Colonial breeder, usually in trees, sometimes on a cliff or in reedbeds; A. c. monicae nests on the ground on islets. Frequents the margins of a variety of freshwater including lakes, streams and swamps, brackish lagoons and estuaries, and often sea coasts. Also feeds or rests on grassland.

In some parts of range a common bird in urban areas. The Grey Heron is a familiar bird of lakes, rivers, pans and also rocky coastlines where it is usually seen hunting in shallow water.

Like others of the family, the Grey Heron flies with its long neck retracted and the head pulled back into its shoulders. They have occasionally been observed to swim.[6] 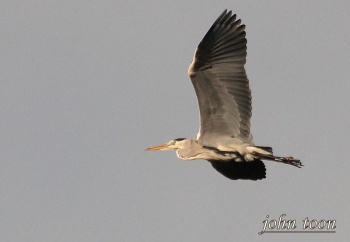 Birds spend long periods standing still in the water, waiting patiently for prey to swim within range of a lightning fast lunge of the bill. Opportunist feeders, they eat a wide variety of fish, invertebrates, land animals, such as rats and young rabbits. They will also eat ducklings and other birds, even swifts and swallows[2].

Colonial breeders, often mixed with other species such as egrets, cormorants and spoonbills. The colony is almost always associated with water - fresh or salt. The nest is an untidy platform of sticks, usually at the top of a tall tree. Usual clutch size is 3-4 eggs.

Extreme northern populations are migratory. Further south they tend to be sedentary or dispersive. 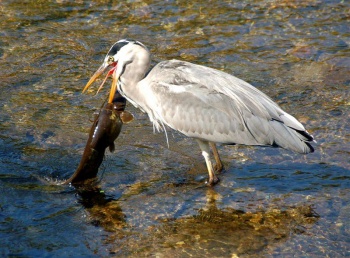 Search for photos of Grey Heron in the gallery

Search for photos of Grey Heron in the gallery