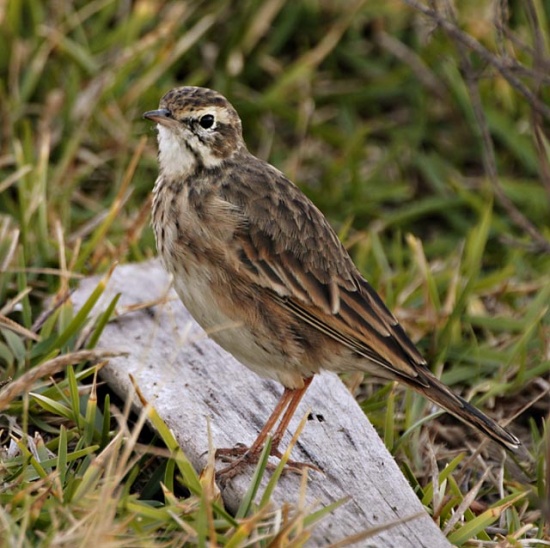 This species was formerly a part of a much larger species called Anthus novaeseelandiae which was split in African Pipit, Mountain Pipit, Paddyfield Pipit, Richard's Pipit, New Zealand Pipit and Australian Pipit. Some authorities still consider it conspecific with New Zealand Pipit.

Has the distinctive habit of flicking its long tail up and down. Long legs, jerky walk and often flies a short distance.

Some pairs remain on territory all year and breed year after year. The female builds the bulky grass nest with a deep cup, which is usually well hidden at the base of a clump of grass, tussock, bracken fern, Manuka bush, or on the side of a bank. Between August and February 2-3 clutches of 2-5 cream eggs, heavily blotched brown with a darker zone at the broader end are laid. The female incubates for 14-15 days and both parents feed the nestlings which fledge at 14-16 days old.

The common call is a shrill scree or drawn out zwee.

Search for photos of Australian Pipit in the gallery