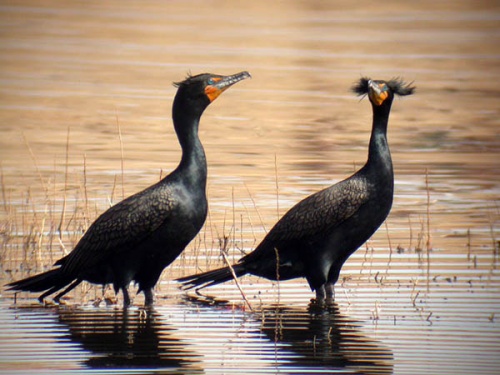 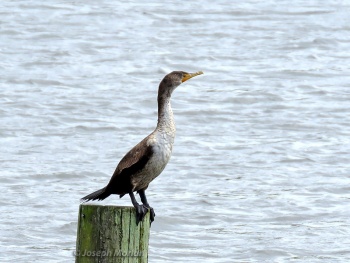 Length 74–91 cm (29–36 in)
Wingspan up to 132 cm (52 in)
Adults: This is a large, black bird that may have green sheen in some lighting. It has a long tail, a chin patch of bare orange skin, and variably white or dark double head plumes for a short period during breeding. Eastern birds are duller.
Juveniles: Variable plumage; overall dark brown, with paler face, foreneck, and breast.

The Brandt's Cormorant lacks the orange chin, and has a shorter tail. The Neotropic Cormorant is a bird of southern latitudes but has expanded its range into Arizona and Southern California. It can be distinguished by its smaller size, longer tail and angled gape line forming a pointed gular. In breeding plumage it has a white outline to the gular.

A very common and widespread species, it winters anywhere that is ice-free along both coasts of North America, as far north as southern Alaska (on the west coast) and southern New England (on the east coast). It can be found as far south as Mexico and the Bahamas.

It migrates from the coldest parts of its breeding range, such as eastern Canada, and has occurred in Europe as a very rare vagrant, for example in Great Britain, Ireland and the Azores. 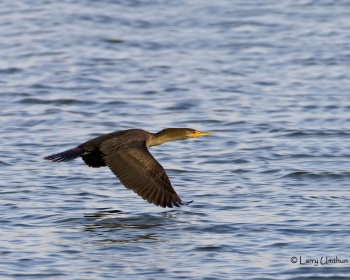 Sometimes placed in the genus Nannopterum

A 5th subspecies, heuretus, endemic to San Salvador in the Bahamas, is not recognised by all authorities[2]. It may be a junior synonym of P. a. floridanus.

Oceans and fresh water ponds and lakes. This is the only cormorant in the US that is commonly found on fresh water.

In flight, note crooked neck. Flies in wavy, loose flocks. The Double-crested Cormorant swims low in the water, often with just its neck and head visible, and dives from the surface. It uses its feet for propulsion and is able to dive to a depth of 1.5–7.5 m (5–25 feet) for 30–70 seconds. After diving, it spends long periods standing with its wings outstretched to allow them to dry, since they are not fully waterproofed. This species flies low over the water, with its bill tilted slightly upward, sometimes leaving the colony in long, single-file lines.

Colonial. Nest is a twig platform either in a tree or on the ground. Clutch is one to seven pale blue eggs. Average clutch is four.

Northern and inland populations migratory, although North Pacific birds only slightly so.

Search for photos of Double-crested Cormorant in the BirdForum Gallery