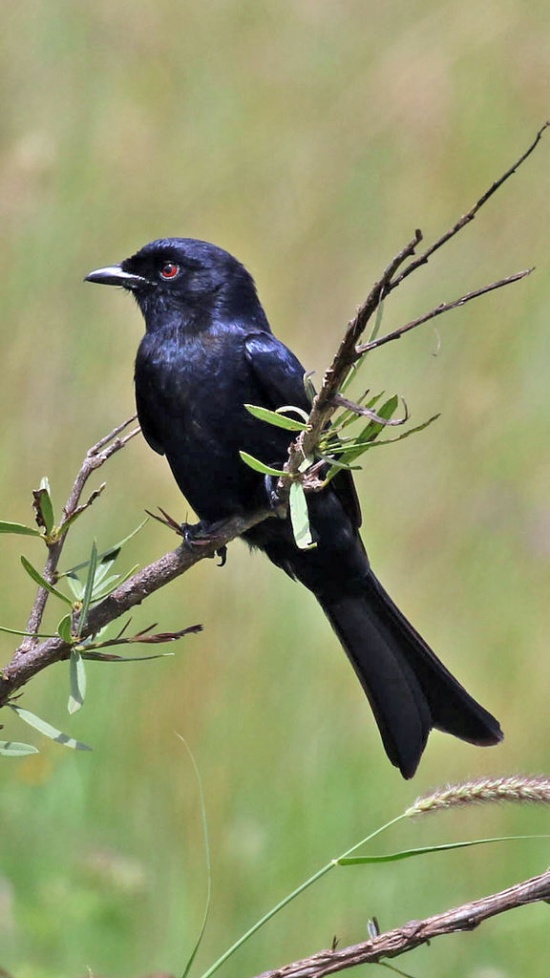 Formerly the population in Tanzania and much of Kenya were assigned to the nominate race, D. a. adsimilis now placed within the range of D. a. fugax. It is described as smaller with a more deeply forked tail.

Differs from similar Velvet-mantled Drongo in having tail shorter than wing, a less deep tail fork, slightly less gloss and no pale rictal spot. Square-tailed Drongo and Shining Drongo are smaller and have a less forked tail.

The Fork-tailed Drongo is a common and widespread resident breeder in Africa south of the Sahara, being most common in Botswana, Zimbabwe and the northern parts of South Africa and Mozambique. 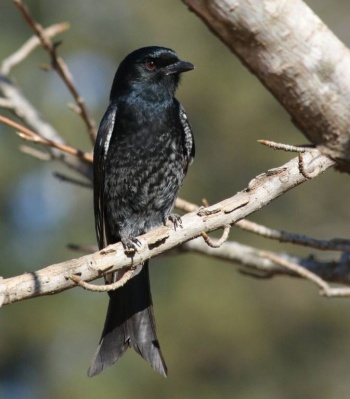 Forms a superspecies with Black Drongo of Asia and was formerly regarded as conspecific. They were split in 2007 by Pasquet et al.[5]The combined pre-split species was known as "Common Drongo" or just "Drongo." Former subspecies D. a. divaricatus now recognized as a separate species, the Glossy-backed Drongo. 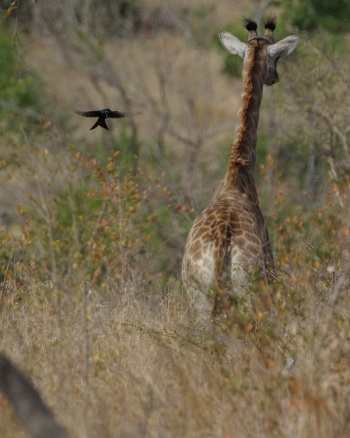 Hovering waiting for insects to be kicked up by the baby giraffe
Photo © by AHH
Kruger National Park, South Africa, 9 July 2007

Sits very upright whilst perched prominently, like a shrike. An aggressive bird, which will attack much larger species, including birds of prey, snakes and humans, if their nest or young are threatened.

Their prey is taken aerially and on the ground, and includes flying insects, moths and bees; most often they will sit on a branch and sally out from there, but it may also be sitting on the ground. They are often seen taking prey disturbed by large animals or bush fires. They also often steal food from other birds, and have been known to steal food from suricates (Meerkats) and Southern Pied Babblers by sounding false alarms.

The call is a metallic strink-strink. They are also excellent mimics.

Resident; possibly some short-distance movements in southern part of range.

Search for photos of Fork-tailed Drongo in the gallery

Search for videos of Fork-tailed Drongo on BirdForum TV