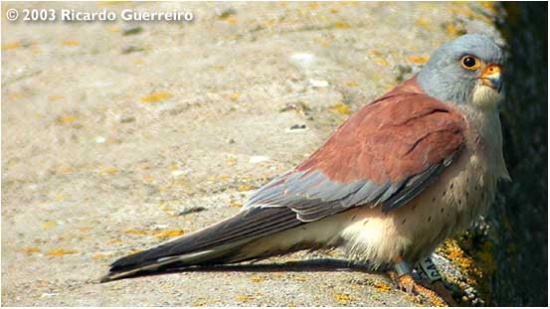 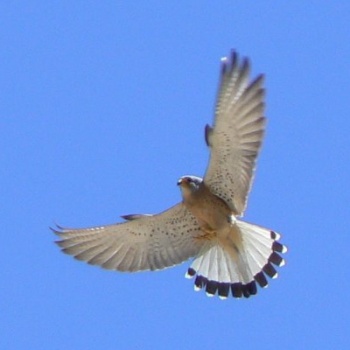 Identifying perched female Lesser Kestrels can be difficult as they're very like female Common Kestrel, but they tend to have a 'cleaner' paler cheek which gives a more gentle look, the two central tail feathers often (but not always) project a little & the wings are longer too (reaching closer to the tail tip). In flight they're more slender and usually have a less densely marked underwing. Also look at the wing tip: if outermost primary (p10) and the one three in (p7) are equal length, then you are looking at Common Kestrel, if p7 is shorter, then it is Lesser Kestrel. However it's generally easiest to wait a few moments for the more distinctive male to turn up!

The adult male is a distinctive little critter with a lovely powder blue head (often lacking any sign of a moustachial stripe which, when present, is always much fainter than in Common), the back unmarked rufous and the wings have a grey panel encompassing the greater secondary coverts and all primary coverts. The underwing is an almost unmarked white and the chest a gorgeous lightly marked salmon-pink.

Again in flight it looks slimmer and flies with more grace. On some birds the central tail feathers project even more markedly than most books illustrate. (Moulting Common Kestrels can show this feature but not to quite the same shape as in Lesser Kestrel). See also wing feature described above. 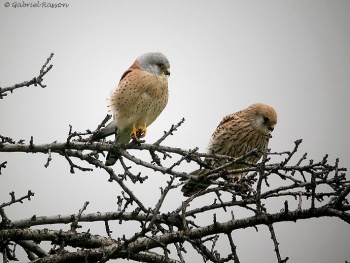 Europe, Asia and Africa. Now rare and declining over most of European range.

Breeds in central and southern Iberia, including Gibraltar, patchily in north-east Spain and southern France, Sardinia, Sicily and the southern tip of Italy and irregularly in South-East Europe. More widespread and numbers higher in Greece and Turkey and from the Ukraine and southern Russia east into Asia. In North Africa found in scattered parts of north Morocco, north Algeria and Tunisia and in the Middle East in Syria, possibly still Lebanon, Jordan and Israel although numbers have declined considerably. In many areas breeding is irregular or sporadic but numbers have increased in Portugal and southern France with the provision of nest-boxes. Breeding range extends westwards from the Caspian to western Sinkiang, Mongolia and Hopeh in northern China.

A summer visitor to most of breeding range, wintering throughout sub-Saharan Africa and India, rarely also Burma. In India, it is regularly sighted in the Thar desert, specifically in the Tal Chappar grassland in Rajasthan. Small numbers remain to winter in southern Spain, especially the Guadalquivir Valley, and also North Africa and southern Turkey. A broad-front migrant but regularly seen at Gibraltar. Most leave Europe August-September and return late February-April.

Vagrants recorded north to Britain, the Netherlands, Denmark, Norway, Sweden and Finland also on the Canary Islands. British records (c.18) have occurred mainly in spring and have ranged from the Isles of Scilly north to Fair Isle. In the east recorded as a vagrant on Tsushima Island, Japan.

Open areas in hot, dry climates with little or low vegetation, e.g. steppe, pastures, semi desert, extensive cultivation. Also in and around towns. Usually found in lowlands but it breeds at up to 1500 metres of elevation in Asia. They use similar habitat in winter and during migration. Large numbers may gather at communal roosts.

They often catch insects with their claws and eat them in flight. In winter when insects are swarming they may hunt in groups following prey disturbed by fires or tractors.

They are colonial, usually in groups of 20-25 or more pairs. They often nest in old buildings, under roof tiles or similar places. They also will use nest-boxes located in high places in the buildings like a tower in a church. Natural sites such as rock faces and quarries may also be used. The clutch is 3-6 whitish to greyish eggs heavily spotted reddish or yellowish. Adults incubate for 26-28 days and the young fledge about 36 days after hatching.

Mainly silent, except around breeding sites, when they give a high-pitched, rasping "chay-chay-chay."

They often migrate in large flocks, sometimes mixed with Common Kestrel or Red-footed Falcon. They are primarily a trans-Saharan migrant, although some birds winter in NW Africa and in parts of southern Europe and southern Asia. However, most birds winter in southern Africa. They become nomadic in winter following insect concentrations.

Search for photos of Lesser Kestrel in the BirdForum Gallery

Search for videos of Lesser Kestrel on BirdForum TV