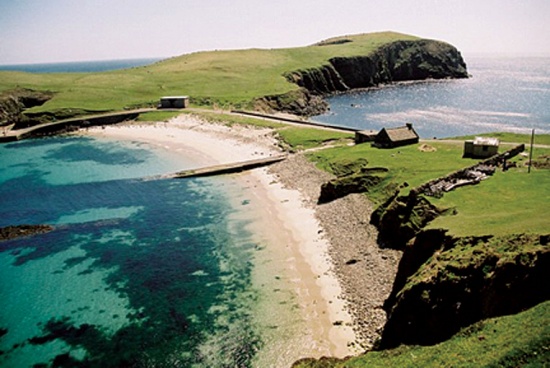 Fair Isle is famous throughout the ornithological world as a bird observatory and as a rarity hotspot, possibly matched in Britain only by the Isles of Scilly.

Over 350 species have been recorded here, more than anywhere else in Britain and these include birds from Siberia and North America some of which have been firsts for Britain and Europe. The 5km by 2.5km island is situated roughly midway between the Orkneys and Shetlands off the northern tip of Scotland.

This island is mainly rough grassland and heather moorland in the north separated from areas of crops in the south by a rough wall and there are high red sandstone cliffs reaching 200m in places. There are few trees or large bushes so any patch of cover, however small, is worth searching during passage periods. Owned by the National Trust for Scotland, Fair Isle is a Site of Special Scientific Interest.

Although it is so well-known for rarities Fair Isle has breeding seabirds in good numbers such as Northern Fulmar, Northern Gannet and Shag. European Storm Petrel is known to breed but although Leach's Storm Petrel occurs breeding has not been proven. More than 50,000 pairs of auks breed including 20,000 Atlantic Puffin as well as Razorbill and Common Guillemot and Black Guillemot. Kittiwake is abundant and four other gulls breed, there are Common Tern and Arctic Tern colonies and Great Skua and Arctic Skua nest on the moorlands.

Spring migration begins in March- April when thrushes and finches occur in large numbers but scarcer migrants begin to appear in May. Regular are species such as Bluethroat, Icterine Warbler, Golden Oriole and Common Rosefinch. Larger migrants that also appear in spring include Common Quail, Eurasian Dotterel and sometimes Corn Crake. Light north-easterly winds can produce "falls" involving huge numbers of migrants which regularly include rarities.

In autumn the passage starts in August but peaks in September and October when the highest numbers of birds occur with east or south-east winds. Chats and warblers generally appear first followed by thrushes and finches in October. Lapland Bunting and Snow Bunting are also regular in October as is Bohemian Waxwing in some years. Scarcer species again include Wryneck and Common Rosefinch and also Red-backed Shrike and Ortolan Bunting. However, all manner of migrants can be seen including owls, raptors and waders and waterfowl including Barnacle Goose and Whooper Swan overfly the island.

Offshore, small numbers of skuas and shearwaters are regularly seen from the island or more often, during the boat crossing, and Little Auk occurs in spring and autumn. Glaucous Gull is a regular winter visitor.

There are also some rarities that cannot be guaranteed but are more likely to appear on Fair Isle than anywhere else in Britain. These include Pallas's Grasshopper Warbler and Lanceolated Warbler, Paddyfield Warbler and Blyth's Reed Warbler, Pechora Pipit and Yellow-breasted Bunting. The best time for these species is mid-late September.

From Siberia species such as White's Thrush, Siberian Rubythroat, Thick-billed Warbler and Yellow-browed Warbler and Pallas's Reed Bunting have wandered to the island.

More than 200 species of plant have been recorded on Fair Isle including Spring Squill Scilla verna along the clifftops and Field Gentian Gentianella campestris. Five species of orchid have been recorded including Frog Orchid Coeloglossum viride and Lesser Twayblade Listera cordata. More unusual are the range of ferns including Adderstongue Ophioglossum vulgatum, Moonwort Botrychium lunare and Wilson's Filmy-fern Hymenophyllum wilsonii.

Fair Isle lies about 40km south of Sumburgh Head on Mainland, Shetland and can be reached by both sea and air.

From May to September there is a mailboat sailing at 11.30am every Tuesday and alternate Saturdays and Thursdays from Grutness on Mainland, Shetland, reduced to Tuesdays only for the rest of the year. The trip takes about 2.5 hours but rough weather often causes delays and advance booking is required.

From May to October Fair Isle can be reached by air from Tingwall on Mainland, Shetland on Mondays, Fridays and Saturdays, reduced to Monday and Friday for the remainder of the year. There are regular flights from the Scottish mainland to Tingwall.