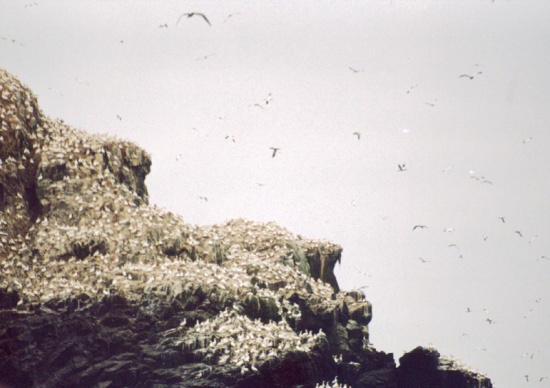 More remote and much less accessible than Skomer, Grassholm lies off the south-western tip of Pembrokeshire and is famous for its gannetry, one of the largest in the world.

In addition to Northern Gannet there are breeding Common Guillemot and Razorbill, Shag, Kittiwake, Herring Gull and Great Black-backed Gull. Oystercatcher breed on the shingle beaches. Atlantic Puffin formerly bred in large numbers but their burrowing led to collapse of the soil and although they now longer breed, small numbers may still be seen in summer when Manx Shearwater is also present offshore.

Grey Seal are common in the seas around the island.

Landing on Grassholm is possible only in very calm weather and not permitted until after 15th June. However, there are boat-trips available which sail around the island from April onwards from Martinshaven.