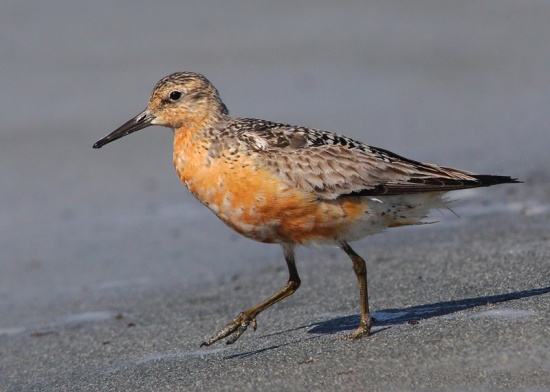 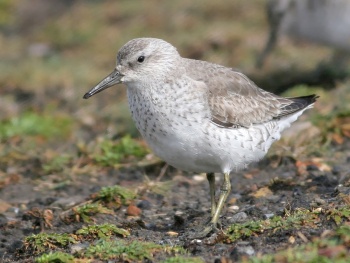 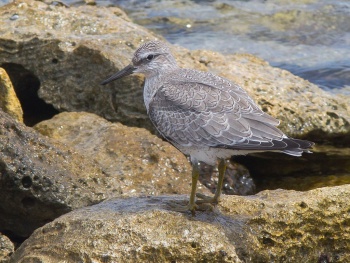 Breeds in the high Arctic of Russia, Alaska, Canada, and Greenland; rarely in the Western Palearctic but there are old breeding records for Svalbard.

A passage migrant and winter visitor to many of the World's coasts; rare inland but will use large freshwater lakes on passage.

For the main wintering areas, see for each subspecies below. Common on passage in the Baltic and on northwest European coasts in July to September, with smaller numbers again in May.

Vagrant to various Cyprus and the Near East countries, Madeira and Cape Verde Islands. Vagrant or rare but regular winter visitor to the Azores.

Most closely related to the Great Knot - Surfbird species pair. 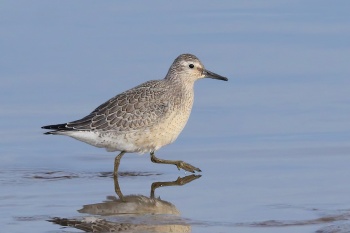 There are six subspecies, eastwards from the Greenwich meridian:

The subspecies differ slightly in size (C. c. piersmai smallest, C. c. roselaari largest), and in the intensity of the summer plumage colours. They cannot be separated in winter or juvenile plumages; their wintering ranges are known from ringing studies. In Britain, two subspecies occur, but at different times of year, with C. c. canutus on passage in late summer and late spring, and C. c. islandica wintering from late autumn until early spring.

Breeds in, sparsely vegetated foothills and high, rocky plateaux. On passage and in winter found on sandy and muddy shores, on wide estuaries and mudflats. Also on shingle beaches and sometimes on coastal grassland.

Their diet consists mostly of insects, such as worms, beetles, spiders, bees, snails and small crustaceans.

Three to four eggs are laid in a shallow lined scrape. They are incubated by both adults. The male tends the young until they fledge.

Search for photos of Red Knot in the gallery