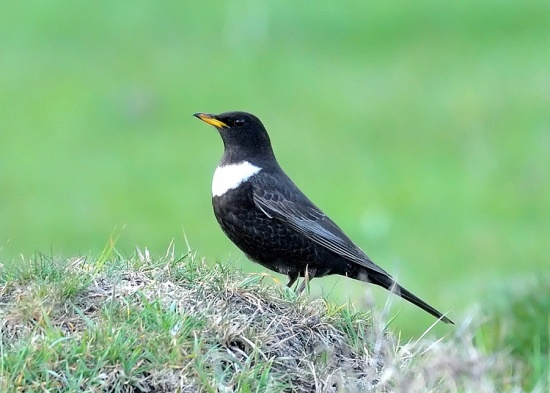 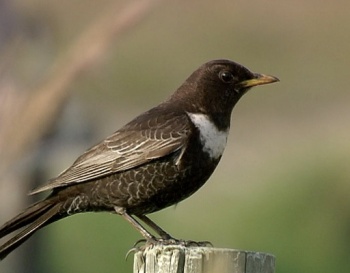 Eurasian Blackbird is similar in a brief appearance, in particular beware leucistic Blackbirds, though these usually lack the pale wing panel and often have additional white patches not shown by Ring Ouzels. Eurasian Blackbird is also dumpier and shorter-winged. Juveniles of both species are very similar, but again the structural differences can help. Subspecies T. t. amicorum approaches Grey-winged Blackbird in wing pattern, though the latter lacks the white breast band. 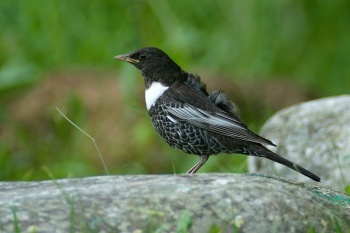 Breeds in Ireland (rare), northern and western Britain, Scandinavia, northwest Russia (Kola Peninsula), Belgium (Ardennes; rare), the Pyrenees, the Alps and Carpathians, and the Balkans east through Turkey to the Caucasus and Alborz mountains of northern Iran; small numbers also in the Atlas Mountains. Has bred Denmark and the Faroes. Usually above 1300 m altitude in the Caucasus, above 1000 m in the Alps, above 300 m in Britain, above 250 m in southern Scandinavia, and down to near sea level in northern Scandinavia.

Migration through most of the rest of Europe, including on low ground, but even then still seeks out steep slopes on hills if available - in southern England, more often found on downland slopes inland, rather than on the coast like other migrants.

Winters in mountains around the Mediterranean (particularly the Atlas Mountains at 1,200-2,700 m) east to southern Iran; small numbers also winter regularly on the higher peaks of the Canary Islands.

Vagrant to Iceland and Jan Mayen in the north, and Israel and Syria to the southeast. 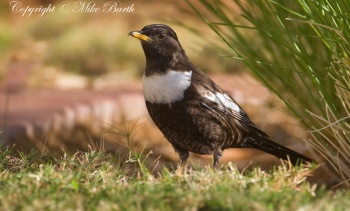 Closest relatives may be the Grey-winged and White-collared Blackbirds, which occur in the Himalaya.

There are three subspecies[1]:

Breeds in remote, mountainous rocky outcrops, in thinly wooded or open habitats with a few scattered trees. In winter, strongly tied to juniper (Juniperus) woods, where the juniper cones ('berries') are a major food source.

Almost always found on steep slopes, where it uses the contours adeptly to escape predators like Peregrine Falcons with ease; usually only on flat ground on migration when no slopes available. Strongly territorial and generally fairly solitary in summer, but may be found in small loose flocks on migration and in winter.

Its diet includes insects, earthworms and other invertebrates, and from late summer into winter also berries, particularly of rowan and bilberry in late summer, and juniper in autumn and winter.

It builds a cup-shaped nest in bushes or amongst rocks, laying several pale blue eggs, mottled with brown.

Rapid and direct, often steeply up or down slopes. Hops or runs.

Search for photos of Ring Ouzel in the BirdForum Gallery

Search for videos of Ring Ouzel on BirdForum TV