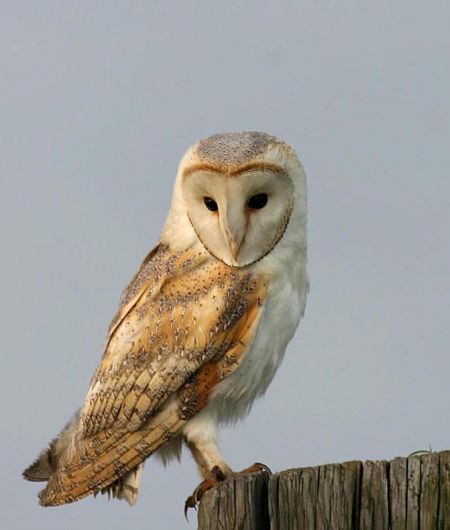 It is 29–44 cm (11½-17¼ in) in length, with an 80–95 cm wingspan. A pale, long-winged, long-legged owl with a white, heart-shaped face. The head and upperparts are buff, and the underparts vary from white to chestnut, depending on subspecies.

Widespread but in decline in many areas due to changes in farming practices.

Breeds in the British Isles (except the north), Iberia and France east to the Black Sea and north to the southern shores of the Baltic. In the south found along the north Mediterranean coast east to the Adriatic but very patchy in Greece, also on all major islands including Crete and Cyprus. Rare and local in Israel, Syria and Iraq. In north Africa breeds in Morocco, northern Algeria and Tunisia, also on the Egyptian coast and in the Nile Delta and Valley. Also breeds on Madeira, the Canary Islands and Cape Verde Islands.

All populations are resident but there is some dispersal of juveniles and vagrants have occurred in Jan Mayen, Norway, Finland and Estonia, also on the Azores.

Also widespread in the North and South America, Africa and Asia. 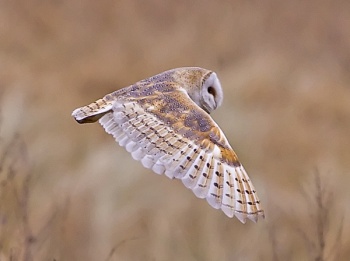 Around 30 subspecies are recognised[1]:

About 8 races have been described from the Western Palearctic. Some are separable on marked differences in plumage and others on range.

Nominate alba from Western and Southern Europe and the Western Canary Islands is pale above and white below, while guttata from Central and Eastern Europe (has also been recorded from Britain) is much greyer above and buff to chestnut below.
T. a. ernesti from Corsica and Sardinia resembles alba but is even paler above as is the large race erlangeri from North Africa, Arabia, Crete and Cyprus which also differs in its bare tarsi and toes.
The main African race, affinis intergrades with erlangeri in southern Egypt and resembles guttata but is larger with deeper colouration and more heavily marked upperparts.
The Madeiran race schmitzi resembles affinis but is smaller with more distinctly spotted and darker underparts, gracilirostris from Fuerteventura, Lanzarote and Allegranza in the eastern Canary Islands is very similar but even darker below and has more slender bill and legs.
Confined to Cape Verde Islands is the race detorta, like guttata but deeper orange below and more distinctly spotted above with thinly feathered legs.

Many other races exist in the remaining part of its range.
Race detorta may warrent species recognition, as also possible for some other races. Andaman Masked Owl has already been split from these species. Closely related to, and sometimes considered to include, the Ashy-faced Owl from the West Indies.
IOC and Dickinson split Tyto delicatula from this species as Eastern Barn Owl and the Opus follows.

König and Weick in their Owl monograph has split the Barn Owl into several species, which may end up being accepted by other authorities:

In a chapter by Wink et al. included in the book is a comment that the American forms need further study and that further splitting may be in order.

Open country with some trees or rocky outcrops for nesting. In Europe now found mainly on farmland with copses, areas of rough grassland and hedgerows. Often nest in old farm buildings, churches and ruins.

The diet includes small mammals, particularly rodents, and is supplemented with other small vertebrate (such as birds and lizards) and large invertebrate life. A couple of examples: In Denmark, the local Barn Owls seems to strongly rely on Screws which are found in wet fields and marshes.
In Florida, the local American Barn Owl population is particularly strong in an area almost exclusively growing sugar cane, and the main food elements are Cotton Rats, Rice Rats, and Black Rats from these fields and House Mouse from the general area. The prey population drops strongly when the sugar cane is harvested, and Barn Owls that suddenly find themselves in a harvested area have lower nesting success than owls where the harvest happens after the young have fledged.

Typical nest sites include buildings, tree stumps and cliff crevices; Barn Owls will readily use appropriately designed nest boxes. The clutch of 4-7 eggs are incubated for 33 days. The male helps feed the young and the chicks can fly after 9-12 weeks.

Hunting flight is typically low gliding over fields and hedgerows with intermittent fast, low flapping ranging flight with a banking stoop with spread wings onto prey. Hunts day or night, though mainly nocturnal. There seems to be a lot of variation in this between different individuals. This makes monitoring populations problematical.