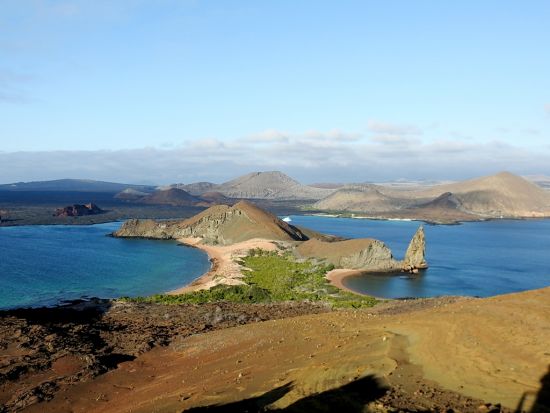 Photo by Helen Baines
Bartolome Island in the Galapagos Archipelago

Ever since Charles Darwin visited this archipelago in 1835, the Galapagos Islands have been a dream destination for many travellers with an interest in natural history. Since the 1960s this dream has become a reality and many thousands have followed in the footsteps of Darwin and visited these islands.

The islands are largely arid at sea level, but the larger islands have highlands with more humidity and consequently with low forests. Beauty is in the eye of the person looking, though the islands have sometimes been described as lacking that feature. The Giant Tortoises and iguanas, the ridiculously tame birds (including seabirds) and the rich and varied life in the surrounding seas ensure the archipelago remains popular.

For the birders the appeal is the many endemic species found in the Galapagos and although the bird list for the islands is not long (about 150 species have been recorded in all) it includes many species that cannot be seen elsewhere.

There are between 25 and 30 species considered truly endemic with an additional number of endemic subspecies. Some additional species have the main or total breeding population in the Galapagos but may be seen away from the islands when not breeding. Many of these birds can be seen on the usual tourist trips to the islands. However, to see almost all of them usually requires a trip with a bird tour company or an expensive and complicated independent visit. Mangrove Finch is currently not within reach for tourists, as the tour boats are not allowed to visit the bay where they still cling on with a very small population. Galapagos Penguin and Flightless Cormorant breed on Fernandina and Isabela and the penguin can also be seen on Santiago, Santa Cruz and Floreana.

The Galapagos Hawk is now rare and much reduced in range but still occurs on Fernandina, Isabela, Santiago, Santa Cruz, Española, and others. The range of the Galapagos Rail is little-known but it is thought to still occur on Santa Cruz and James, probably also Fernandina, Floreana and others. Floreana Mockingbird is restricted to the islets of Gardner-near-Floreana and Champion off Floreana, the Hood Mockingbird to Hood and nearby Gardner-near-Hood and the San Cristobal Mockingbird to San Cristobal. The Large Ground-Finch is confined to Isabela and Genovesa and the Sharp-beaked Ground-Finch to Genovesa, Pinta, Fernandina, Santiago, Darwin, and Wolf. Common Cactus-Finch occurs relatively widespread while Large Cactus-Finch is on Española, Darwin, Wolf, and Genovesa. Vegetarian Finch on Santa Cruz. Large Tree-Finch is found on Floreana and Santa Cruz, Medium Tree-Finch on Floreana, Woodpecker Finch on Santa Cruz and Mangrove Finch on Fernandina and Isabela.

The remaining endemics are more widespread and occur on most of the main islands. The Galapagos Heron/Lava Heron occurs throughout the islands and is variously regarded as a full species or a race of Striated Heron which also has been reported from the archipelago. (But these reports most likely refer to Lava Heron which seems to occur in two color phases, which can be separated form mainland Striated heron by differences in build such as legs being sturdier).

Endemic subspecies include the local form of Yellow Warbler and White-cheeked Pintail among others. There are also Brown Pelican, Red-billed Tropicbird, boobies, frigatebirds, Brown Noddy and Sooty Tern.

Many species of migrants have been recorded in the islands including 30 species of wader, some rare seabirds, waterfowl and various passerines and fuller exploration would undoubtedly increase the list.

The Galapagos Giant Tortoise and the endemic Land Iguana and Marine Iguana are the best known of the archipelago's non-avian inhabitants but there are also sea-turtles, Galapagos Sea Lion, Galapagos Fur Seal and various cetaceans in the local seas as well as a large population of sharks. Galapagos is also well know as a diving destination.

Since the discovery in 1535, Galapagos has increasingly been visited by humans. For a while, the main interest in the islands was as a base for whaling, but settlers also moved in. In the last century or so, tourism has increased in Galapagos, with the Ecuadorian government and the National Park system trying to control what is going on. This seems to be more successful regarding controlling tourists than controlling immigrants who want to make money by servicing the tourists.

Most islands have one or more populations of interest as described in the "Notable species" section.

A trip to the Galapagos with a bird tour company is the only way to guarantee seeing all the endemics possible (currently excluding Mangrove Finch) as the ordinary tourist trips do not visit all the necessary sites. However, these tourist trips are geared towards natural history and many of the archipelago's specialties will be seen.

It is possible to sail to the Galapagos from Guayaquil in Ecuador but most visitors prefer to fly from Quito or Guayaquil, landing at Baltra near Santa Cruz where cruises can be arranged with all accommodation and food included.

Search for photos of Galapagos Islands in the BirdForum Gallery

Search for videos of Galapagos Islands on BirdForum TV