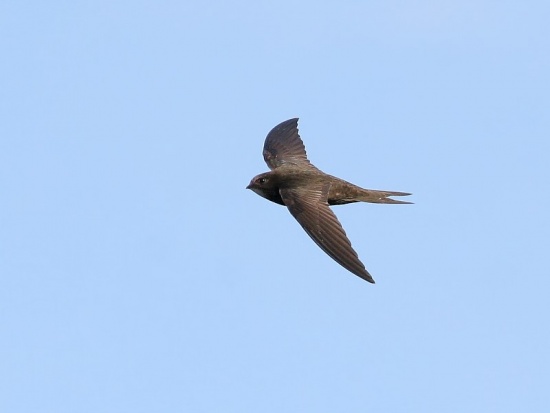 Common Swifts are 16-17 cm long and entirely blackish-brown except for a small white or pale grey patch on their chins which is not visible from a distance. They have a short forked tail and very long swept-back wings that resemble a crescent or a boomerang.
The inner part of the wing has front and back edge paralel to each other. Swallows and Martins have wings giving a more triangular impression. 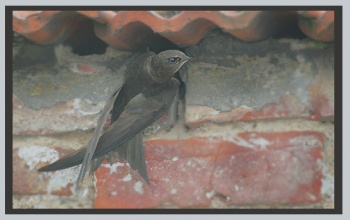 Common House Martin are very white below and dark from above, with much shorter, dark tail, and a prominent white rump

By far the commonest swift of much of its range. Breeds from the Mediterranean north to northern Scotland, central Norway and the Kola Peninsula. Breeds across North-West Africa and in scattered localities in the Middle East. Has bred on Malta and recently discovered breeding in the Canary Islands. To the east range extends across Asia to northern China.

Feeds chiefly over open country and often over water, commonly in urban areas, in lowlands or mountains.

Swifts spend most of their lives in the air, living on the insects they catch in their beaks. They drink and even sleep on the wing.

Monogomous. They build their nests mainly in holes in buildings, but also crevices in cliffs and caves. They return to the same nest every year.

Search for photos of Common Swift in the gallery