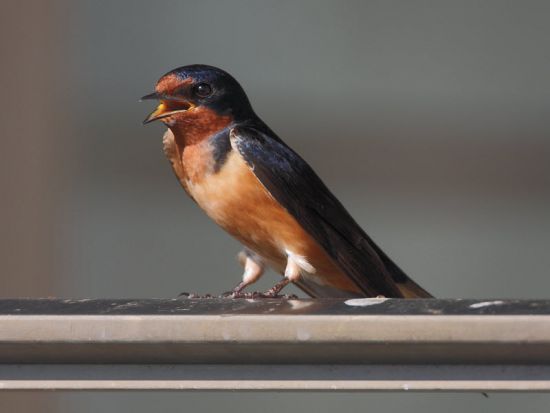 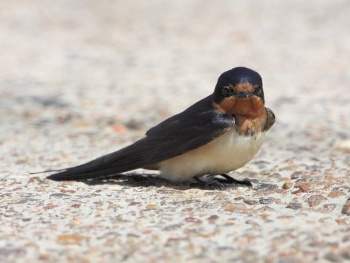 Length: adult 17–21cm (6¾-7½), juvenile 14–15 cm; weight 16–24 g
Adult glossy blue-black above. Forehead, chin and throat reddish-chestnut. Breast band below throat glossy blue-black, broad in some subspecies, narrow or broken in others (see Subspecies, below). Remainder of underparts creamy white to orange-red depending on subspecies. The deeply forked tail is spotted white at the base. Sexes alike, but female has shorter and broader tail streamers.

Juvenile duller and browner (less glossy) above, and tail shorter, with blunt tail streamers, and a brownish-pink forehead and throat.

Variation: the extent of the breast band, the maximum length of the tail streamers, and the underside colour varies among populations. 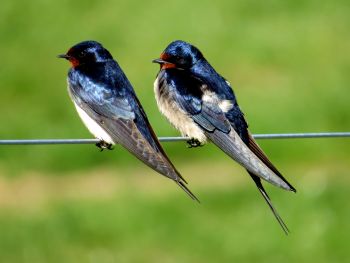 Juvenile Barn Swallow lacks the white rump of a Common House Martin. In other parts of the world see Pacific Swallow and Welcome Swallow.

House Martin are very white below and dark from above, with much shorter, dark tail, and a prominent white rump

Sand Martin are pale from below with a dark throat band, and noticeably brown-coloured above.

There is a difference in the flying style too: Common House Martin flight is more fluttery than Barn Swallow, which is faster, more direct and swooping, while Sand Martin are more fluttery still, while Common Swift is very fast and looks somewhat stiff-winged.

Finally, the calls are all quite distinct: Common Swift calls are quite loud and screeching, while Barn Swallows are more twittery and varied. House Martin and Sand Martin calls are quite similar to each other, less sustained than swallows, and more chirpy and clipped, with Sand Martin being slightly scratchier or gravelly-sounding. 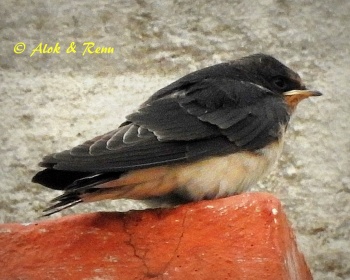 Breeds mainly in the northern half of the globe.

Abundant and widespread throughout the Palearctic, breeding from the Ireland, France and Portugal east across Europe and Asia to Kamchatka, Japan, and Taiwan. In the north found to 70° N on the Norwegian coast and breeds north to the White Sea in Russia. Breeds on the north Mediterranean coast and most islands, in Turkey and the Caucasus, across northwest Africa and in the Nile valley, but only locally in the Middle East; in southern Asia breeds south to the Himalaya and southern China, including Hong Kong.

In the New World it breeds throughout most of North America and winters in Central and South America. A disjunct population has recently started breeding in Argentina; this population migrates to northern South America during local winter.

Small numbers regularly winter in southern Spain and northwest Africa, but the majority of European birds winter in sub-Saharan Africa, south to the south coast of South Africa. They leave the breeding areas between August and October and return from March to May. Middle Eastern and Egyptian birds are largely resident. Asian birds winter from southern Iran east across southern Pakistan, India, and southeast Asia to northern Australia.

Vagrant north to Iceland (has bred), Faroe Islands (may breed annually), Svalbard, Bear Island and Jan Mayen, also on the Azores, and south to Tristan da Cunha, the Falkland Islands, and South Georgia. 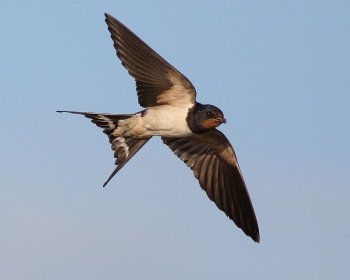 Closely related to Red-chested Swallow H. lucida and Angola Swallow H. angolensis of tropical Africa, both of which have sometimes been treated as subspecies of Barn Swallow in the past. 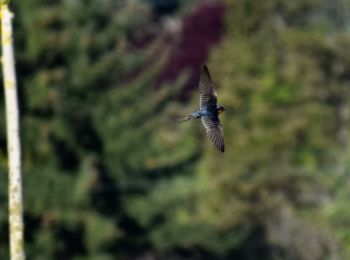 Seven to eight different subspecies are accepted[1][2], with typical birds of several of these separable in the field. Variation in eastern Asia is particularly complex, and often disputed[3]. Some genetic evidence that Old and New World populations may be separable at species rank[3], though this has not [yet] been advocated by any of the major ornithological authorities.

Perches on dead branches in trees, and other exposed perches; has adapted well to human activity and very inclined to sit on telegraph wires.
Gregarious, often seen feeding in the company of other species of Hirundinidae and swifts.

Fast, with clipped wing beats, often low to the ground. Will fly across a water surface to drink or bathe whilst on the move.

Barn Swallows have been studied extensively for what influences sexual selection etc. In short, in Europe a male with long tail streamers seems to do well. In North America, the colour of the underparts, especially the breast area, seems to be important for the breeding success of a male, with dark colour being advantagous (length of tail streamers still probably is important).

It originally nested in tree holes or overhanging crevices on cliffs (and still does so rarely), but now almost exclusively nests inside buildings such as barns and stables, or under bridges and wharves. Usually the female builds the cup-shaped nest, placed on a beam or against a suitable vertical projection. It is made from mud pellets and lined with grasses, feathers or other soft materials. Four or five reddish-spotted white eggs are laid, and are incubated by the female for 14-19 days; the young fledge 18-23 days later.

Search for photos of Barn Swallow in the gallery