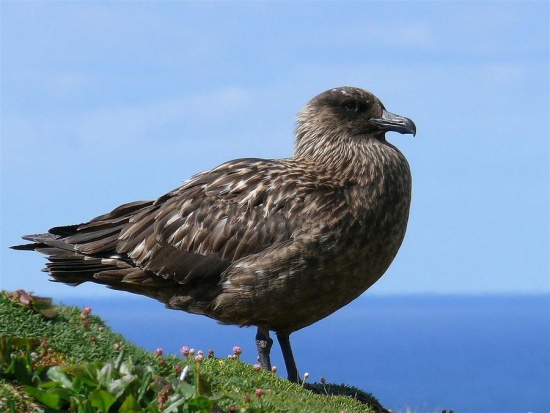 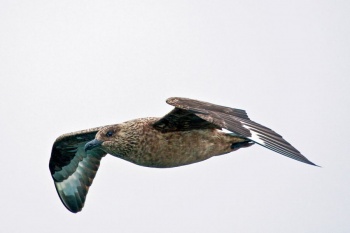 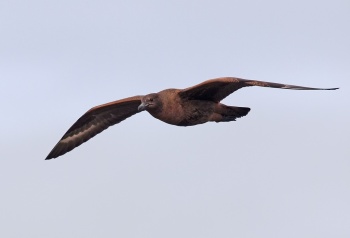 Breeds in Iceland, the Faroes, northern Scotland (common on the Shetland Islands), Norway (including Svalbard, Jan Mayen and Bear Island) and around Kola Peninsula in northwestern Russia.
Winters mainly off the coast of northern Spain and Portugal but also along the coast of Western Africa, in the Mediterranean, off the east coast of North America and south to Brazil.

This is a Monotypic species.[1]
Has been placed in the genus Catharacta with the other large skuas (Sibley & Monroe, 1993; Clements, 2000). Formerly often considered conspecific with Brown Skua and Chilean Skua, and sometimes also with South Polar Skua. Genetic evidence suggests that the Pomarine Skua may be of ancient hybrid origin between Great Skua and one of the other smaller skuas.

Open ocean, usually near coastlines.
Quite common on the Shetland Islands, living on moorland and hill tops. There are 400 breeding pairs on the Island of Noss, and this is one of the biggest populations in the world today.

A powerful marine predator and kleptoparasite, stealing food from other seabirds of all sizes, and regularly killing and eating other seabirds up to the size of Herring Gulls and occasionally even Great Black-backed Gulls and Northern Gannets (both significantly larger than itself); also takes fish and other seafood, including by following fishing boats for discards. On the breeding grounds it will also take land animals like Rabbits.

The nest scrape may be lined with grass. The two large brownish-olive, blotchy eggs are laid at the end of May or beginning of June.

They are very protective of their nests and young, and they will attack intruders (including people) at any opportunity, flying from behind and kicking with their sharp claws.

Search for photos of Great Skua in the gallery