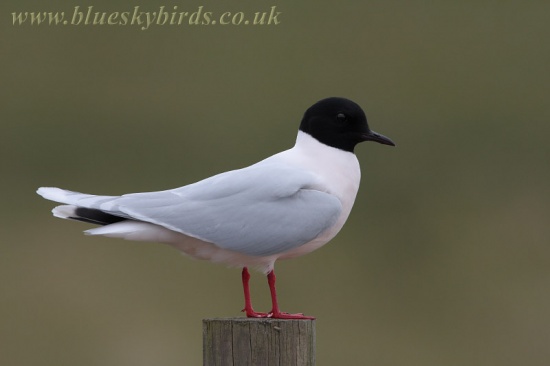 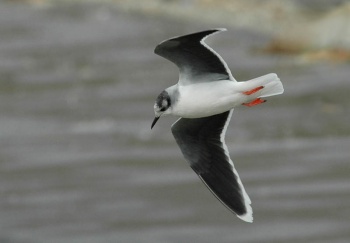 Ross's Gull is slightly larger with usually at least part of the dark collar, grey wingtips and lighter grey underwing (adult), shorter stubby bill, and longer primary projection.
Bonaparte's Gull is larger with longer bill, much longer primary projection, and dark wingtips with a white forewing 'blaze'.
Black-headed Gull is much larger with a less extensive brownish hood, dark wing tips with a white forewing 'blaze', and larger red bill (in all plumages except juvenile which has paler bill).

Breeds central and southern Finland and the Swedish islands of Öland and Gotland, the Baltic States, Belarus, northern Ukraine and across Russia to around Novosibirsk, with a disjunct population in eastern Russia and northeasternmost China from Lake Baikal east to the upper Amur River basin. Also breeds in very small numbers or sporadically elsewhere in north and east Europe including Norway, the Netherlands, Denmark and Poland, and very locally, a recent colonist around the Great Lakes area in Canada.

Isolated breeding pairs or attempted breeding has also been recorded in Britain and France, Germany, the Czech Republic, Austria and Romania.

Winters in the Gulfs of Bothnia and Finland and the Baltic, the coasts of east and southern British Isles (scarce) and from Denmark to Spain. In the Mediterranean occurs in the north from Gibraltar to the Middle East and off northwest Africa and also winters in the Black Sea and Sea of Azov. The eastern Russian breeders migrate to the Yellow Sea in winter. Small numbers also winter off the east coast of Canada and northeast USA. Spring return movement in March-May. Passage is both coastal and inland, and migrants can be seen across much of Britain and mainland Europe. First-summer birds often spend the summer in the wintering range, or a short distance outside of the breeding range; birds in this age group are much commoner visitors to Britain in summer than adults.

Vagrant north to Iceland, Faroes and Norway, and south to Hong Kong, Kenya, the Middle East and Kuwait, and the Canary Islands and Madeira. 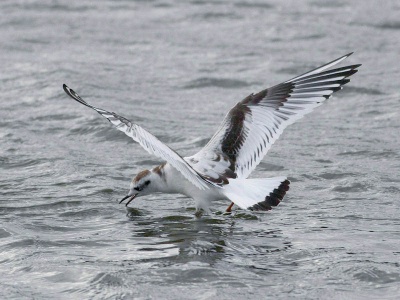 
It was formerly often placed in the genus Larus. Genetically it is however most closely related to Ross's Gull Rhodostethia rosea; this is included in Hydrocoloeus by some authors, and also shares several aspects of plumage, particularly of immatures.

Somewhat similar to a Black Tern in summer both in choice of overgrown marshes for breeding and in often plucking food off the surface of water through repeated dives.

Search for photos of Little Gull in the gallery

Search for videos of Little Gull on BirdForum TV