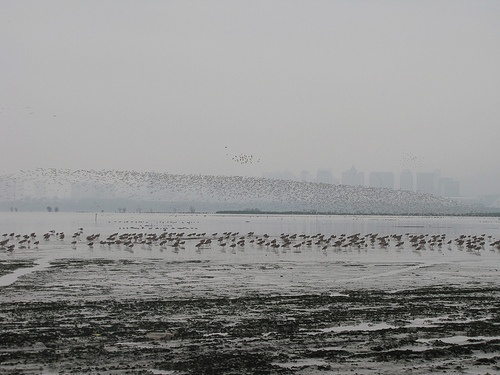 Located just inside the tropics, enjoying a wide diversity of habitats and in a prime coastal location smack in the middle of the East China Flyway Hong Kong packs a surprisingly heavy birding punch, with more than 480 species recorded in just 1000 square kilometres.

Justifiably famous for the tens of thousands of waders of more than 40 species that use the Deep Bay area (Mai Po) as a migratory stopover - birders from all over the world come here to see such rarities as Spoon-billed Sandpiper, Nordmann's Greenshank, Asian Dowitcher, Black-faced Spoonbill and Saunders's Gull, Hong Kong offers a great deal more, including a terrifc array of eastern palearctic migrants, South China forest birds, overwintering eagles, thousands of waterfowl and gulls and a recently discovered seabird passage.

It is less well-known as the only known wintering site in the world for Styan's Grasshopper Warbler and the only known site for the sinica race of Chinese Grassbird.

The Mai Po Reserve consists of shrimp and fishponds, mudflats and mangroves and is situated in the east of Deep Bay. There is a visitore centre and hides overlooking scrapes and mudflats but a visit requires prior permission from the related Hong Kong SAR Government Authorities and WWF Hong Kong. Entry without permission is strictly forbidden.

Lok Ma Chau lies to the north of Mai Po and the paddyfields and ponds here also attract waders in large numbers.

Long Valley is an area of wet agricultural land close to Sheung Shui, in the north of the New Territories. The site is very good for birds of freshwater wetland and farmland, including Greater Painted-snipe, Pintail Snipe, Swinhoe's Snipe, Wood Sandpiper, Zitting Cisticola, Yellow-breasted Bunting and White-shouldered Starling.

The best remaining area for forest birds in Hong Kong is the Tai Po Kau Reserve near Tai Po on Tolo Harbour.

To explore this reserve head for the milestone 42 lay-by south-east of Tai Po and walk up the forestry road. There are a number of trails to follow and birds here can include Crested Serpent Eagle and Crested Goshawk, Asian Barred Owlet and Great Barbet, Greater Necklaced Laughingthrush and Red-billed Leiothrix. The forest here is particularly good for migrant passerines and winter visitors include Grey-backed Thrush, Japanese Thrush and Eye-browed Thrush, Forest Wagtail, Ferruginous Flycatcher, Yellow-rumped Flycatcher, and Green-backed Flycatcher and warblers including Pale-legged Leaf Warbler, Eastern Crowned Warbler and Asian Stubtail. An early visit is usually necessary to see any birds here.

Victoria Peak provides the best birding on Hong Kong Island itself, within easy access of the city centre. Blue Whistling Thrush, Black-throated Laughingthrush, Chinese Hwamei and Blue Magpie can be seen here with the addition of various migrant passerines in season.

In recent years, the island of Po Toi, off the southern side of Hong Kong island (and accessible by ferry from Aberdeen or Stanley), has been discovered as a migration hotspot during spring and autumn. Numerous Hong Kong rarities have been found, including Masked Booby, Lesser Cuckoo, Drongo Cuckoo, Ruddy Kingfisher, Blue-winged Pitta, Fairy Pitta, Chinese Thrush and Red-breasted Flycatcher. Pacific Reef Egret, White-bellied Sea Eagle and Black-naped Tern breed on some of the smaller islands of Hong Kong and the numerous inter-island ferries provide opportunities to see seabirds such as Streaked Shearwater and Aleutian Tern.

Search for photos of Hong Kong in the gallery

Search for videos of Hong Kong on BirdForum TV