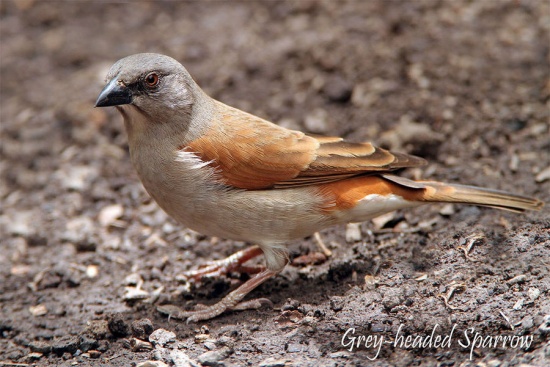 Photo © by scottishdude
The Gambia, March 2010

Sexes similar. Juveniles are duller and browner and have no white in wing-coverts.

Widespread in central and western Africa.
Common in its range and currently spreading to east and southeast.

Occurs in grassland savanna, light woodland, cultivated areas and in and around human habitations. Found from sea-level up to 2500m.

Feeds mainly on seeds of grasses and cultivated cereals. Takes also fruits and household scrap. Nestlings are fed with insects.
Usually seen in pairs or small groups, outside breeding season in larger flocks.
Breeds all year, coinciding with local rains. Prefers loose colonies. The nest is a dome with a side entrance, made of dry grass. It's placed in a tree, a tree hole or a hole in a building. Lays 3 - 4 eggs.
A nomadic species.

Search for photos of Northern Grey-headed Sparrow in the gallery