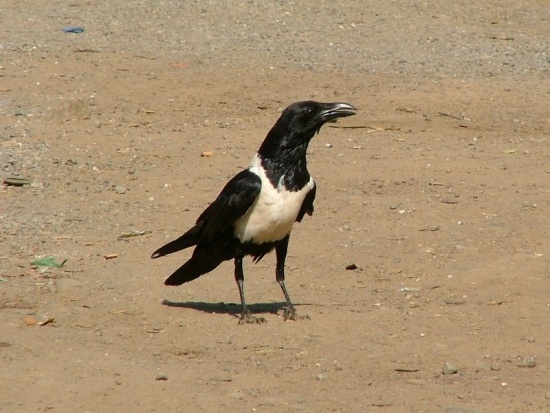 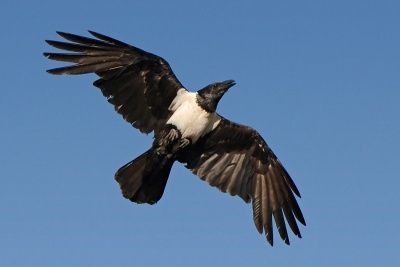 Subsaharan Africa and Madagascar.
Absent in most of Ethiopia and Eritrea and another gap in the arid regions of Namibia and Botswana. Records in south Morocco.
Common and widespread in its range.

This is a monotypic species.
Forms a superspecies with Brown-necked Raven and is known to hybridize with this species in the northeast of its range.

Diet includes insects and other small invertebrates, small reptiles, small mammals, young birds and eggs, grain, peanuts, carrion and any scraps of human food and fruit. Often seen near roads waiting for kills, also scavenging at rbbish dumps with Black Kites and Marabou Storks.
Usually foraging in paris or small groups. Sometimes larger flocks reported when food is abundant.
Breeding season varies with local rains. The nest is usually built in tall trees. 4-5 pale green brown spotted eggs, are laid. Incubation is 18-19 days and the young are usually fledged by around 45 days. Both sexes rear the young. The nest is sometimes parasitized by Great Spotted Cuckoo.

The voice is described as a harsh ar-ar-ar-ar or karh-karh-karh.

Search for photos of Pied Crow in the gallery