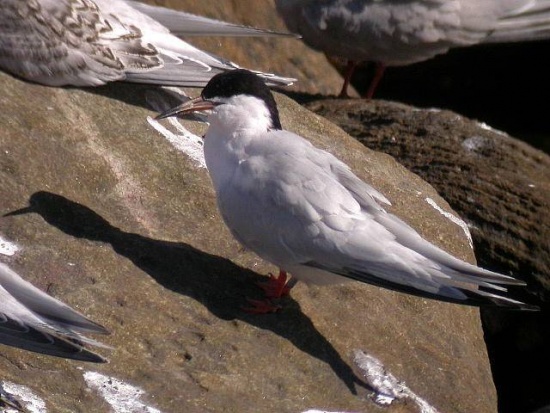 Thin sharp black bill, with a red base which develops through the breeding season, and is more extensive in the tropical and southern hemisphere subspecies. Upper wings are very pale grey (distinctly paler than Arctic and Common Terns) and underparts white with a variable pinkish tinge (often lost in winter) which gives this bird its name. The adults have very long, flexible tail streamers and orange-red legs; wings relatively short, with outer three primaries darker; flight with faster wingbeats than Common and Arctic terns, at times even reminiscent of Little Tern. Juveniles with a scaly mantle pattern similar to juvenile Sandwich Terns, but with more extensive black freckling on fore crown.

Widespread but patchily distributed, breeding on the coasts and islands of the Atlantic, Indian and western Pacific Oceans, in western Europe (north to 55°30'N in northeast England), eastern North America, eastern and southern Africa, the Malagasy Archipelago (Madagascar, Seychelles, and nearby islands), south & east Asia (north to southern Japan), and Australia. Northern Atlantic populations migrate south in autumn to winter quarters in the Caribbean and west Africa, those in Japan south to northern Australia. Tropical and southern hemisphere populations are resident or dispersive.

Five subspecies[1] are currently recognised, though are ill-defined:

It nests in a ground scrape, often in a hollow or under dense vegetation, and lays 1 or 2 (rarely 3) eggs. Readily takes to nestboxes on the ground where these are provided, more so than other terns.

Its diet includes fish, mostly caught by itself, but kleptoparasitism on Atlantic Puffins is also practiced. Parents have been recorded teaching their young to fish by the parent bird catching a fish and then dropping it into the water, the immature bird would then swoop down and take it while the parent follows closely along side.

Although globally listed as Least Concern, it is generally scarce, and declining or endangered in many parts of its range. Nestbox provision has assisted population recovery in some areas by reducing loss of eggs and chicks to gulls. Formerly bred on several islands in Scotland, including in the Firth of Clyde, where Montagu first discovered it in 1813.

Search for photos of Roseate Tern in the BirdForum Gallery

Search for videos of Roseate Tern on BirdForum TV