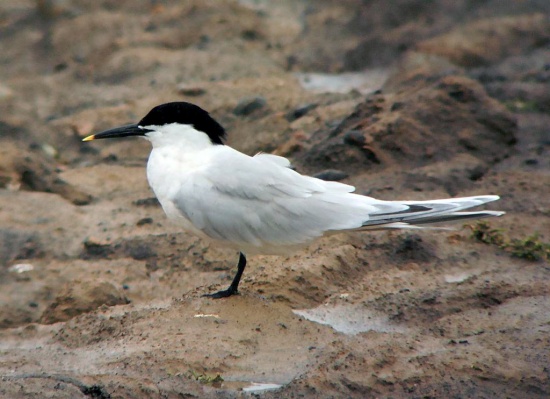 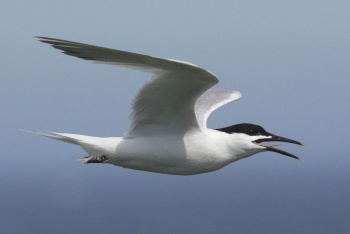 Summer Adult: forehead, crown and nape black. Loose long feathers at the nape form a crest in the wind or when excited.
Winter Adult: black areas on the front and top of the head turn white and speckled black on the crest. This can happen as early as June, more usually from July onward.
Juvenile: scalloped with blackish-brown chevrons on mantle and wings, brown on forehead, crown and nape; white elsewhere. Bill is blackish-yellow to all black.
First-winter: mantle becomes pale grey, and forehead white after post-juvenile moult in a month or two after fledging; some scalloping remains on wing coverts.

T. s. acuflavidus differs from T. s. sandvicensis most obviously in a shorter, stouter bill; in South American eurygnathus populations the bill contains an increased amount of yellow. There are also differences in timings of wing moult, and in the juvenile plumage having less scaling on the mantle[5].

Gull-billed Tern is superficially similar in plumage, but differs structurally, with longer legs, shorter broader wings (more gull-like in flight), shorter, thicker, all-black bill, no crest, and a pale grey rump.
Lesser Crested and Elegant Terns are structurally very similar, but differ in their bright orange bills, and in Lesser Crested, also a pale grey rump, and in Elegant, a longer bill.
Juvenile Roseate Tern has a similar scalloped mantle pattern, but is smaller, has a darker forehead, and a longer tail. 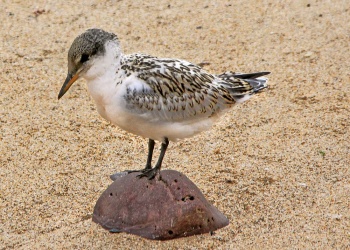 A breeding summer visitor widely on the coasts of Europe and southwestern Asia (Estonia west to Ireland, and western France, and east through the Mediterranean from northeast Spain to the Black Sea and Caspian Sea), wintering on the west and north coasts of Africa, the Arabian Sea, and locally of western India. A separate [sub]species (see Taxonomy, below) breeds on the Atlantic coasts of North and South America, wintering additionally on the Pacific coast of northern South America.

Like the other Thalasseus terns, this species was formerly often placed in the genus Sterna. 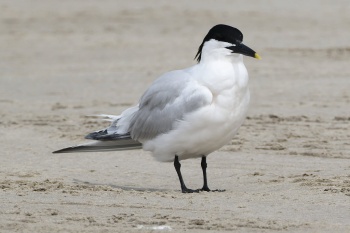 Three subspecies are recognised by some authorities[1], while others treat it as monotypic, with the other two subspecies treated as separate species[2][3]:

A study of genetic data[4] showed that acuflavidus (including eurygnathus) was more closely related to Elegant Tern than to Sandwich Tern, and should be treated as separate species, Thalasseus acuflavidus. In the past, the populations with all or mostly yellow bills were sometimes treated as a separate species, Cayenne Tern T. eurygnathus, but in genetics these are very close to Cabot's Tern[4]. However, notice that the evidence was evaluated by the AOU NACC in 2013 and that the evidence was found lacking in quality[10].

There are one or two records of transatlantic vagrants of each of T. s. sandvicensis in North America and T. s. acuflavidus in Europe; in both cases including ringed birds which allowed confirmed identification at a time when field identification between them was still poorly researched[6][7].

Almost entirely marine. Breeds on shingly, sandy or rocky islands with a high degree of protection from land predators.

Colonial nesters (often with Common, Arctic, or other terns), the nest is a ground scrape and they lay 1-3 eggs.

Their diet consists mostly of small fish (caught by plunge-diving), including squid and shellfish.

Search for photos of Sandwich Tern in the gallery