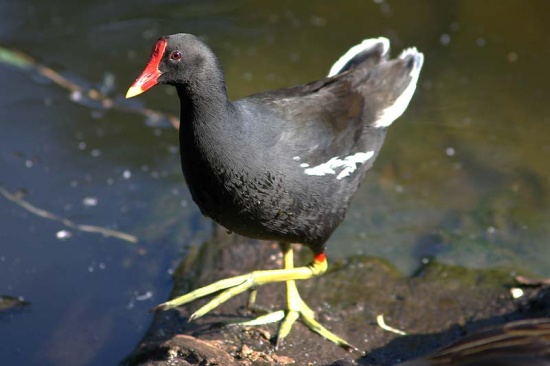 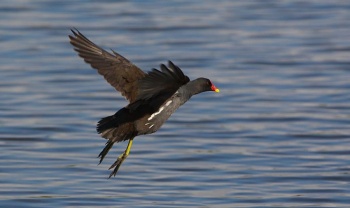 Adult: Slaty black, except for a white under-tail and white streaks on the flanks. Eye red; bill red with a greenish-yellow tip; frontal shield red; legs and feet yellowish green with a red garter above the tarsal joint. The red shield and red bill with yellow tip are diagnostic (the Lesser Moorhen is smaller and has a yellow bill with red on the culmen and frontal shield only).
Very similar to Common Gallinule (G. galeata) of North and South America. Eurasian Moorhen has its frontal shield narrow and rounded at the top. Common Gallinule has its frontal shield broader and more squared-off at the top. Moorhen also has a brighter red orbital and more extensive yellow on the tip of its lower mandible. Common Gallinule has duller eyes and less yellow on it mandible. There is also a difference in back color. Common Gallinule usually has its back a rich chestnut brown (North American populations), strongest across the upper back where it contrasts with the gray neck and breast. Eurasian Moorhen has a more olive-brown back which blends with the gray and is strongest on the tertials. More reliable than these subtle plumage differences is voice. Common Gallinule has a highly distinctive laughing call.
Immature: Above dark brown; below buffy, paler in centre of belly; iris grayish brown; bill and frontal shield greenish brown; legs and feet greenish, garter yellow.
Chick: Downy black; feathers around neck tipped white; skin above eye blue; bill red, tip yellow; small frontal shield red; legs and feet blackish brown. 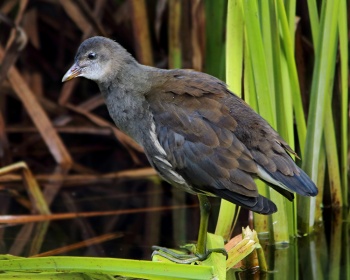 Common Moorhen is a species that occur in Europe, Africa and Asia. 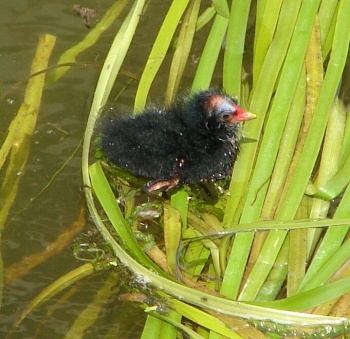 Widespread and generally very common bird in the Western Palearctic. Breeds from the British Isles and Iberia east to the Urals and Caspian Sea. In the north breeds around coastal Norway as far as about 66° N, in the southern half of Sweden and extreme south Finland. In the south breeds around the Mediterranean, on the Balearics, Corsica and Sardinia, Sicily, Crete, Cyprus and some of the Aegean islands and has bred on Malta. Also breeds at very scattered localities in the Canaries and northwest Africa, in the Nile Valley and in parts of western and southern Turkey, the Middle East and Iraq. Formerly bred on the Cape Verde Islands.

Populations from central Europe eastwards are migratory, wintering in southwest Asia or Africa, the remainder are resident or partially migratory. Also resident are small populations on Terceira and possibly Sao Miguel in the Azores, and a scarce but increasing resident on some of the Canary Islands.

Vagrant north to Svalbard, Iceland and the Faroes in the north and Madeira in the south.

Common Gallinule from the Americas was formerly considered conspecific.

Virtually any kind of freshwater: marshlands and swamps, lakeshores and riverbanks, often in urban parks and sewage ponds. Frequently feeds on grass adjacent to water.

Often seen swimming and feeding while doing so, but also feeds during excursions up on e.g., lawns.

Not quite so quarrelsome as Coots

Runs across the water before take-off. Legs trail behind.

Swims with a jerky head movement.

Omnivorous. Grazes on land and dives, or dabbles, for vegetable matter, small crustaceans and insects.

Occurs in all months of the year; may rear up to 8 broods/year. The nest is a bowl of rushes and reeds concealed in dense aquatic vegetation well above the water level; built by both sexes. Clutch: 4-9 eggs (sometimes up to 11, possibly laid by 2 females). Eggs: Dark buff to grayish white, spotted, freckled and blotched with red-brown and slate; weigh about 25 g. Incubation: 21-22 days by both sexes; the female incubates only by day and the male incubates at night. Fledging: 40-50 days; young dependent on parents for 1-6 weeks after first flight.

Search for photos of Common Moorhen in the gallery