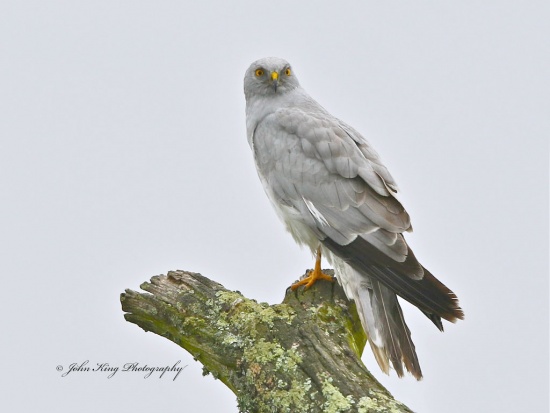 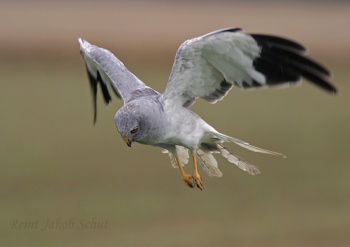 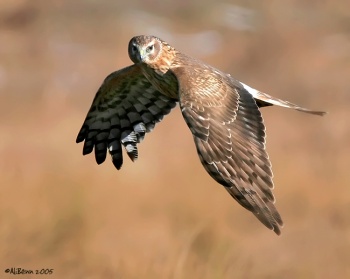 The North American Northern Harrier, a rare vagrant in western Europe, has upperparts mottled dark grey and flanks and breast rufous-spotted in males, darker upperparts in females, and more orange underparts in juveniles than Hen Harrier.
Also see Montagu's Harrier and Pallid Harrier which both show four 'fingered' primaries in flight; Montagu's also has dark secondary bar, and Pallid only 3-4 black primaries in male. Also see other harriers depending on where the observation is done; in Europe, Western Marsh Harrier is heavier with broader wings. 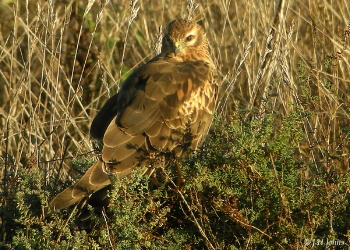 Widespread in Europe and Asia.
Breeds widely between around 35°N and 65°N latitudes across the entire width of the landmass. In Europe the main breeding range is from central Sweden, Finland and the Baltic States, south to the Black Sea and east to the Urals. However, also breeds patchily in Ireland and northern Britain (nearly extinct due to illegal persecution), in north and central France and northern Spain, with smaller populations in the Netherlands, Denmark and central Norway, Germany, Poland and the Czech Republic. Recently bred for the first time for many years in Italy.

The Asian range extends from the Urals to the Pacific coast, breeding in the Russian far east, on Kamchatka and Sakhalin, and northern and eastern China.

It is a summer visitor in Scandinavia, Russia and northern China, but resident or partly so in western and central Europe. Widespread in winter from British Isles, France and Spain east to the Black and Caspian Seas. Small numbers winter in Morocco and Egypt and can be seen on the major migration routes but relatively few cross the Mediterranean. Recorded in some numbers at Falsterbo, peaking in early-mid October.

Asian populations winter south to Japan, southern China south of the Yangtze, and northern India; a rare straggler to Taiwan.

A vagrant north to Iceland and the Faroes and to several Middle Eastern countries.

This is a Monotypic species[1][2].
Formerly included Northern Harrier (and still so by Howard & Moore[7]), and sometimes also Cinereous Harrier[8], as subspecies; these have been split as separate species in view of the distinct morphological and ecological differences between them[2][3][4][5].

Hen Harrier populations are secure in some areas, but in others, notably Great Britain, have suffered massive declines due to determined criminal persecution by game-shooting estates.

Breeds in marshes, grasslands and heathlands, sometimes in mountains, often in cultivated areas.

Like all harriers, hunts using a low, slow flight over the ground, with their wings held in a shallow "V", then plunge onto their prey.

They build a nest of sticks and grass on the ground in thick heather, grass or shrubs. The clutch contains three to six eggs which are incubated by the female for 29 - 31 days, fledging about a month later.

They take 2 - 3 years to mature, but may attempt breeding in their first year.

Search for photos of Hen Harrier in the gallery

Search for videos of Hen Harrier on BirdForum TV