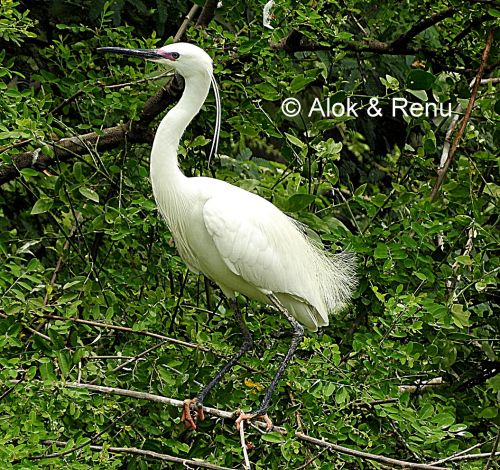 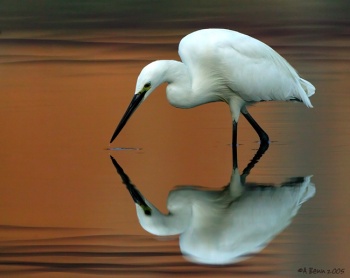 (21¾-25½ in) 55–65 cm
A small white heron with black legs and bill, and yellow feet. In breeding plumage it has two long slender plumes from the back of the head and plumes on the back and breast. Most of the year, the lores are bluish-grey, but in pre-breeding display they become bright yellow, orange, or even flushed bright red in excited birds.

In winter plumage, the plumes are lost.

Juveniles differ in having no plumes, and drabber bare part colours, with dingy dark grey-green legs with more extensive dull blackish-yellow on the lower legs, a dark grey bill with a paler base, and dull grey lores.

Race nigripes is similar to the nominate, however their feet are black, sometimes with yellow soles; their eyes may turn red during courtship. Race immaculata has yellow lores in non-breeding plumage and like nigripes they have black feet with yellow soles; both lores, eyes and soles of feet turn red during courtship, while back plumes are more highly developed than other races of this species as well as Western Reef Heron. The subspecies dimorpha has a dark, an intermediate and a pale morph. 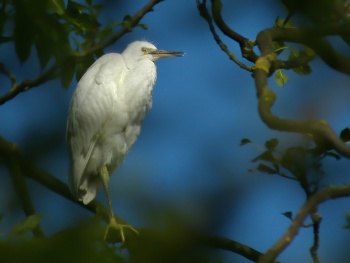 On Little Egret, the upper edge of the bare facial skin is straight from eye to bill, while in Chinese Egret that line goes down before going back up[2]. See also Snowy Egret for comparison of that species with Little Egret[3]. 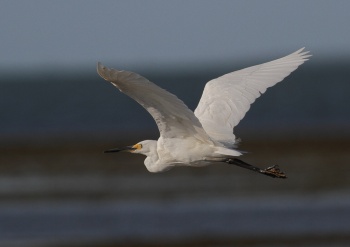 From western and southern Europe, though southern Asia to Korea, Japan, and Indonesia to New Guinea, as well in northern and eastern Australia, and New Zealand.

In recent years it has increased substantially in western Europe, with breeding first recorded in Great Britain in 1996, rising to around 100 pairs in 2001 and 900 pairs in 2012. First breeding in Ireland, Austria and Poland took place in 1997. This is largely a recolonisation, as the species was abundant in Britain in mediaeval times, being popular on the menu of large banquets; it became extinct in this region by the 16th century due to a combination of over-hunting and colder winters in the "Little Ice Age"[4]. In Britain Little Egrets can now be seen on estuaries and lowland pools almost anywhere except for central and northern Scotland. The largest numbers, often several hundred, occur from Cornwall to West Sussex, with numbers reaching a peak in autumn when many immature birds arrive on post-breeding dispersal from further south.

In north Africa occurs from the Cape Verde Islands and coastal Mauritania to Tunisia and throughout the Nile Delta and valley. It is also widespread south of the Sahara, from Senegal to Somalia and south to South Africa. The subspecies dimorpha is found on Madagascar.

Most European and west Asian birds migrate to sub-Saharan Africa but others winter around the Mediterranean, and small numbers as far north as southern Scotland. Post-breeding dispersal takes many birds north of main breeding range in late summer and autumn.

Recorded as a vagrant to most European countries out of usual range north and east to Iceland and the Faroe Islands, Norway, Latvia and Belarus, also recorded in the Azores, Madeira and Canary Islands (first breeding in 1995).

It has also recently (since 1994) colonised the Western Hemisphere, with a breeding colony on Barbados, and has occurred with several reports from Trinidad to Martinique and Puerto Rico, and with vagrants north through the eastern United States and Canada with records in Delaware, New Brunswick, Maine, Massachusetts, and Newfoundland. 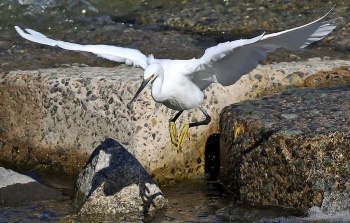 Some authors formerly considered the Western Reef Egret and Pacific Reef Egret to be subspecies of this species[5].
dimorpha is recognized as full species, Dimorphic Egret by some authorities. 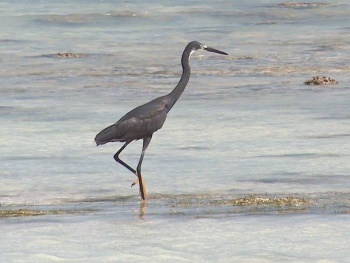 nigripes is sometimes called immaculata but this seems to be a junior synonym.

Forms communal roosts where birds from a large area gather at dusk.

Breeds colonially in trees near water. They lay from 4 to 6 eggs hatching after 3 weeks. They fledge at 4 weeks old spending a further 4 weeks in the care of the adults.

They have a wide, varied diet; mostly consisting of small fish, but they also include amphibians, insects and small mammals.

Search for photos of Little Egret in the gallery